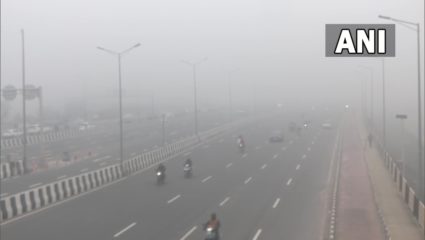 New DelhiDense fog engulfed the national capital on Thursday morning and the visibility reduced to 100 meters at 7 o’clock. The minimum temperature in the city was recorded at 5.8 degrees Celsius, two notches below the season’s average. According to the Meteorological Office, the visibility at the Safdarjung observatory reduced to 100 meters due to dense fog at 7 am.

The visibility in Palam ranged between 50 meters and 100 meters due to dense fog after 4.30 am on Thursday. Officials of the India Meteorological Department said, “The sky will be mainly clear in the city and there will be moderate to dense fog.” He said that the maximum temperature on Thursday will be around 20 degree Celsius. The maximum temperature on Wednesday was recorded at 18.1 degrees Celsius, two notches below normal.

The relative humidity stood at 100 per cent at 8.30 am on Thursday. The long distance trains to Delhi were also delayed due to dense fog, officials said. According to the data of the Central Pollution Control Board (CPCB), the air quality in Delhi remained in the poor category on Thursday morning and the AQI was recorded at 290 at 9 am.

The first woman astronaut to go to the moon wearing a ‘very special’ spacesuit, NASA spent about 22 billion rupees

‘Ahimsa-Gandhi: The Power of the Powerless’ at the 21st ‘New York Indian Film Festival’, won the award for ‘Best Documentary Feature’