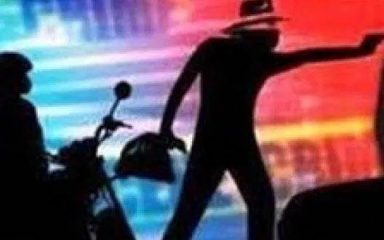 Nagpur. In the case of theft of gold ornaments worth Rs 4.71 lakh, the Hudkeshwar police caught the thief working in the shop of the owner of the house. On his behest, the police also recovered goods worth Rs 4.50 lakh. The name of the accused was stated to be Mayur Sahuji Durudkar (30), resident of Vishwakarmanagar, Chandrapur.

Two days ago, Monali Suraj Shirbhate, a resident of Geetanagar, Besa, had gone to attend her sister-in-law’s wedding with her family at 11.45 am. On his return at around 6.45 pm, 157 grams of gold ornaments were missing from his cupboard. Their total cost was stated to be Rs 4.71 lakh.

Was working in the shop for two and a half years

Monali’s husband runs a hardware shop. Mayur used to work with him for the last two and a half years. His wife used to do domestic work at Monali’s place. Being an old servant, both Monali and her husband had faith. In the police investigation, Mayur’s old criminal record came to the fore. There are many cases of theft registered against him in Chandrapur.

The cupboard was opened with the key

Investigation revealed that the accused had not done any kind of sabotage to open the cupboard but had opened it with a key. Only then did the police suspect that the theft was done by someone from the house. The police did not find anything in interrogation of all the family members. In such a situation, the needle of suspicion moved on the servants of the house. Apart from Mayur and his wife, the police started recording the statements of other servants. During this, Peacock’s actions looked suspicious. After being strictly interrogated in custody, he spilled the whole truth.

Goods were pressed near the house

After confessing the theft, he told that he had buried the jewelery in the ground at some distance from the house itself. He was looking for the right opportunity. As soon as the police investigation got cold, he was planning to sell all the goods, but before that he got caught by the police. Police recovered jewelery worth Rs 4.50 lakh from the place mentioned by him. This action was completed in 18 hours by Zone 4 Deputy Commissioner of Police Nurul Hasan, ACP Ganesh Biradar Senior PI Sarthak Nehete, API Swapnil Bhujbal, Manoj Neware, Santosh Sontakke, Chandrashekhar Kaurati, Sumit Chaudhary etc.

A British professor has been reported lacking whereas on a analysis journey to Chile, police…

We Want to Rebuild U.S. Relations With China