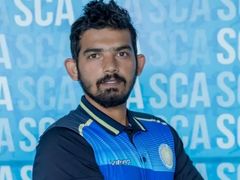 Once again the sudden cardiac arrest of a young and fit man has raised questions in the minds of the people. In June this year, 29-year-old Danish footballer Kristian Eriksson suddenly stopped beating. However, his life was saved. But Saurashtra batsman Avi Borat, former India Under-19 captain and a member of the Ranji Trophy winning team in the 2019-20 season, was not that lucky. The Saurashtra Cricket Association (SCA) said that Barot died at the young age of 29 following a “serious” cardiac arrest.

Explaining the causes of cardiac arrest, Dr. Krishna Reddy Nallamalla, a cardiologist and country director of Access Health International, said, “There are some underlying causes of sudden cardiac arrest. The most common cause is myocardial infarction or heart attack.”

“Ventricular tachycardia and ventricular fibrillation are two common rhythm disorders, which account for a large proportion of sudden cardiac arrest. Sudden heart failure due to a rhythm disorder occurs in heart patients who have previously suffered a heart attack.”

A study on the causes of cardiac arrest in athletes found that too much exercise can stop the heart.

What precautions can be taken to prevent cardiac arrest? Dr. Krishna Reddy says, “Sudden cardiac arrest can be prevented with a healthy lifestyle, medicines and some devices. Early detection of heart attack and early opening of blocked coronary artery will reduce the incidence.”

It should be noted here that cardiac arrest and heart attack are not the same. Heart attack can be one of the causes of cardiac arrest. Certain factors such as smoking, drug use, high blood pressure, high cholesterol and a sedentary lifestyle can increase the chances of coronary artery disease, which can lead to heart failure.

Jio did such a thing that internet speed increased in this state, know everything about it

Investment Tips: Invest money in these 4 great schemes, you will earn big every month

Shilpa Shetty welcomes Ganpati with daughter in a different way