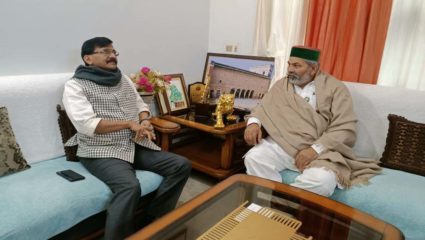 Mumbai: Shiv Sena spokesperson Sanjay Raut has also reached there for the preparations for the assembly elections in Uttar Pradesh. On this occasion, he made it clear that Shiv Sena will not forge an alliance with any party in the UP elections. Sanjay Raut says that his party is planning to field its candidates on 50 to 100 seats. He said that we have been working in UP for a long time, but did not contest the elections because we did not want to harm the BJP.

Meeting with farmer leader Shri Rakesh Tikait in Muzaffarnagar today, there was a long discussion on the serious problems and issues of the farmers of Uttar Pradesh and the politics of the country. In particular, the burning issues of Western UP were discussed. Shiv Sena is dedicated to give justice to the farmers. pic.twitter.com/tNRD8T1CbV

Sanjay Raut also met with farmer leader Rakesh Tikait during his UP visit. After this meeting, now new equations are being speculated. Tikait had launched a long movement against the Center’s Farmers Act, after which PM Narendra Modi had to decide to withdraw this law. Raut said that there is huge resentment among the farmers about the policies of the BJP government at the Centre. BJP will have to bear the brunt of this in UP elections.

Changes decided this time in UP

He has once again reiterated that this time change is certain in UP and the BJP government will have to go from power. Raut has accused the BJP of making a strategy to win elections with the help of notes. Maharashtra Chief Minister Uddhav Thackeray has also spoken to Rakesh Tikait through a mobile call. It is believed that Thackeray has appealed to Tikait to support Shiv Sena in the UP elections.

Gold rate today: Strong pressure on gold and silver in rupee, know the latest price of 10 grams of gold

Bad Bank to be formed in 1 to 2 months, new DFI may merge IIFCL: Financial Services Secretary