Mutual Fund Investment: Investing in mutual funds for the first time, so do not make these mistakes even by mistake, otherwise money can be... 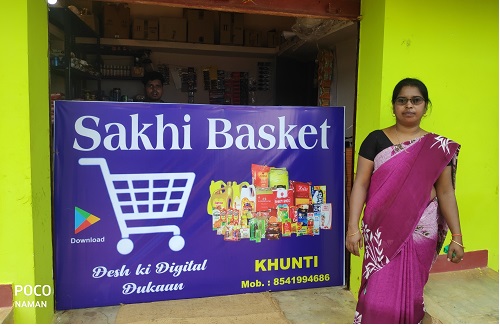 During the Corona period, women in the villages of Jharkhand are trying to change their fortunes by technology. Through the mobile app, rural women are writing a new story of change in their lives as well as others.

Today, the women of Sakhi Mandal in Jharkhand have used ‘Sakhi Baskets’ to increase income from technology and have become an inspiration for other women. 6 women members of Anigada two Sakhi mandals (women’s groups) located in Sadar block of Khunti district of Jharkhand have started the home-delivery of ration (everyday household items) through online orders.

In this period, where people were avoiding leaving their homes, this shop called ‘Sakhi Basket’ run by these rural women is providing ration to the people from house to house with full vigilance. During the last four months, ‘Sakhi Basket’ has delivered goods to the homes of more than 1,500 people.

People of 4 km radius of Netaji Chowk in Khunti district are offered free delivery on orders up to Rs 250 for customers ordering through the Sakhi Basket app, while the customer gets Rs 20 on purchase of goods under Rs 250. The additional amount has to be paid as delivery charges.

Anigada Village Sakhi Mandal was formed in the year 2017, under which women of road-group were earning their livelihood through agriculture. Meanwhile, due to problems in the Corona period, 6 women planned to do ‘home delivery’ of everyday items.

These women took a loan of 50-50 thousand rupees from their groups and bought goods in bulk and then set up a distribution center in the area. In the early days, these women took orders through WhatsApp and started bicycle delivery.

After this, these women made contact with the people related to technology and made the app available on the Google Play Store and for technical support and stock updates, the app was linked to an app called Computer Relationship Management. Through this app, customers are choosing the language at their convenience and asking for the available goods sitting at home and also paying for the money online.

Meera Devi, who is running the Sakhi Basket, tells IANS During the lockout, people were afraid of corona and people were afraid to get out of the houses, in such an environment, we made an effort to transport the essential goods to the people home. Of.

She says that the bar code has been placed on the delivery basket in view of the risk of infection so that customers can make online payments to the face marked account in case of no cash.

Sakhi baskets are being operated by rural women, mainly Meera Devi and Saroj Devi take care of this establishment. Saroj Devi manages the shop by herself. These women have delivered goods to 1,500 homes so far and since April, about 5 lakh 72 thousand rupees have been transacted through Sakhi Basket.

Here, says Saroj Devi, We are not focusing our attention on profitability right now, rather we are placing more emphasis on our stock and customer growth so that we can serve more people in the district.

Rajiv Kumar, CEO of the Jharkhand State Livelihood Promotion Society of the Rural Development Department, tells IANS that the women of the group are doing many innovative experiments with the help of the group-provided bank linkage, including the government.

This Mumbai startup is making your socks very special

SBI warns all customers, do not make mistake even if such a mistake can be a big loss!

Battlegrounds Mobile is sending data of Indian users to China! Government can ban the game