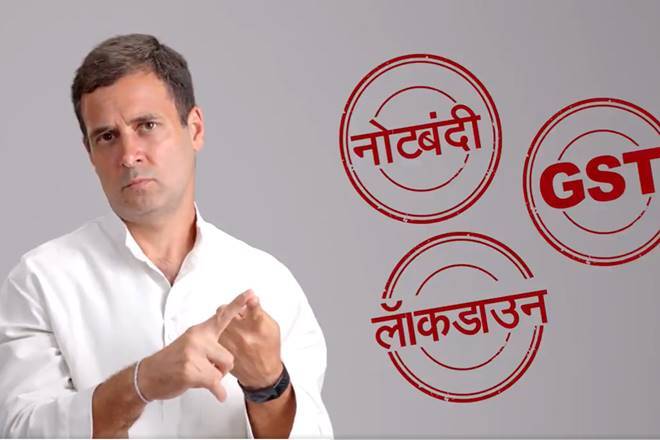 Rahul Gandhi Arthvyavastha ki Baat: Former Congress president Rahul Gandhi has made a big charge on the Modi government on Monday. By releasing a video, he said that the BJP government has attacked the unorganized economy of the country and an attempt is being made to enslave it. Rahul Gandhi has started a video series. Its first video was released on Monday. Gandhi says that the Indian economy is in a severe recession for the first time in 40 years.

Referring to the recession of 2008, Rahul Gandhi said that when there was a huge recession in the whole world especially America, Europe, Japan. Banks were closing there, companies were closing. But nothing happened to India, it was because the unorganized sector here was strong. At that time there was the UPA government. Referring to his conversation with the then Prime Minister Manmohan Singh, Gandhi said, “Manmohan Singh ji had said that till the day the unorganized economy of India remains strong, the recession cannot even touch it.”

The unfortunate truth of the economic tragedy that the country is facing will be confirmed today: For the first time in 40 years, the Indian economy is in a huge recession.

‘Untouchables’ are blaming God for this.

Watch my video to find out the truth. pic.twitter.com/sDNV6Fwqut

Attack through demonetisation, GST and lockdown

Rahul Gandhi said that in the last 6 years, the BJP government has attacked the unorganized economy. There are three big examples of this – demonetisation, wrong GST and lockdown. The goal of these three is to end our informal sector. Lockdown is a well thought out conspiracy. According to the International Labor Organization (ILO), 40 crore unorganized workers in the unorganized sector can be trapped in the crisis of extreme poverty. According to the Center for Monitoring Indian Economy (SMIE), 2 crore people have lost jobs in the last 4 months.

Rahul Gandhi said that he accused PM Modi, “The Prime Minister needs media and marketing to run the government.” Media-marketing is done by 15-20 people. There is lakhs and crores in the information sector, which these people cannot touch. These people want to break it. The result will be that India will not be able to generate employment. Because the unorganized sector provides more than 90 percent of the employment. ”

He said, “The day this unorganized sector ends, on that day India will not be able to generate employment. You are the one who walks the country, takes it forward and a conspiracy is going against you. You are being duped and trying to enslave you. ”

Maruti Suzuki Celerio will be more powerful than before, know when it will be launched

Taking Stock:Profit recovery seen for the fourth consecutive day, know from analyst how the market may move tomorrow