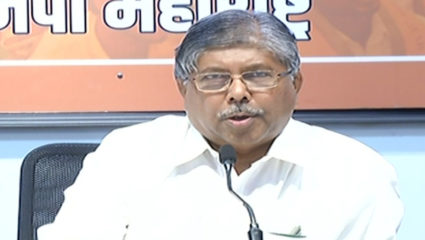 Mumbai: BJP state president Chandrakant Patil has said that the incident of stopping Prime Minister Narendra Modi’s convoy in Punjab was a conspiracy to kill him. It is now clear from the sting operation conducted by a news channel. BJP will start an awareness campaign about this serious issue regarding the security of the country.

In the press conference organized in Kolhapur, Patil said that the incident regarding the security arrangements of the Prime Minister is not minor and Congress leaders are making fun of him. He said that it has become clear from the sting operation that the local police had informed the top officials about the agitation on the Prime Minister’s way two-three days back and they were directed not to take any action. The Pakistani border is just 10 km away from where the incident took place. The place is under drone attack.

Opponents are plotting to endanger the life of Prime Minister Narendra Modi. pic.twitter.com/PHZ4D49clh

Worrying to ridicule a serious issue of national security

Patil said the Congress party and the Punjab government should now accept that it was an attempt to murder. He said that ridiculing a serious issue of national security is worrying. Congress leaders have ridiculed the conspiracy to assassinate PM Modi.