Political ruckus on increasing the jurisdiction of BSF, Center responded to Punjab and Bengal government 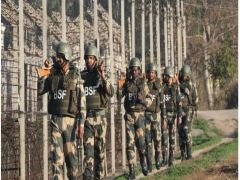 BSF Augmented Powers Row: The Central Government has amended the Border Security Force (BSF) Act to give it the power to search, seize and arrest in a large area of ​​50 km from the present 15 km from the International Border in Punjab, West Bengal and Assam.

At the same time, in the areas of Gujarat bordering Pakistan, this range has been reduced from 80 km to 50 km and in Rajasthan there has been no change in the area limit up to 50 km. The Union Home Ministry issued a notification in this regard on October 11.

Meanwhile, there has been a political uproar to increase the jurisdiction of BSF to 50 km. The Government of Punjab and West Bengal has strongly objected to this provision of the Ministry of Home Affairs. The Punjab government has taken strong objection to the Centre’s move to empower the BSF to conduct searches and arrests within 50 km of the International Border, terming it an attack on federalism.

Tagging Union Home Minister Amit Shah on Wednesday, Chief Minister Charanjit Singh Channi tweeted, “I strongly condemn the unilateral decision of the Government of India to give additional powers to the BSF in an area of ​​50 km along the international borders, which is a direct attack on federalism. is attack. I urge Union Home Minister Amit Shah to immediately withdraw this inconsistent decision.

Apart from this, Punjab Home Minister Sukhjinder Singh Randhawa said that the Center has given the area up to Amritsar, Batala and Amritsar to BSF. There is an appeal to Prime Minister Modi, it should not be accepted. Attention BSF Drones. He said that we do not understand what the Center wants to do. Punjab Police has fought terrorism, can’t it fight with drugs? Why is the Center looking at Punjabis with suspicion? He said that this is a direct blow to the federal structure.

At the same time, criticizing the Center over the decision to increase the jurisdiction of the BSF, the ruling Trinamool Congress (TMC) in Bengal on Thursday said that it is an encroachment on the rights of the state and an attack on the federal structure of the country. The TMC demanded the Center to withdraw it, claiming that the decision was taken without consulting the West Bengal government.

Trinamool spokesperson Kunal Ghosh said that we oppose this decision, it is an encroachment on the rights of the state. What was the immediate need to expand the BSF’s jurisdiction without informing the state government. If the BSF has to conduct searches anywhere, it can always do so in collaboration with the state police. This has been going on for years. This is an attack on the federal structure.

Apart from this, Bengal Congress President Adhir Chaudhary cautioned that the Union Home Ministry will have to face the consequences of this move. He said that in some states, extending the BSF’s jurisdiction to 50 km from the border is openly violating the territory of the states. Ministry of Home Affairs You should not do any tampering otherwise you will have to face the consequences.

Amidst the ongoing tussle over the increase in the jurisdiction of the BSF, senior sources in the central government say that the matter is of national security and hence the debate on it is unnecessary. Government sources told News18 that the debate on BSF getting more power is unnecessary as it is an issue of national security. He said drones were being used by the enemy country, and it was important for India to empower the BSF.

At the same time, according to the Indian Express, regarding the new order, a senior BSF officer said that we will continue to work with the state police as we are doing now. Our jurisdiction is being extended, their jurisdiction is not being curtailed. Apart from this, we can only arrest someone, the task of prosecuting is ultimately to be done by the state police.

The official said that if Punjab has a problem of smuggling of drugs and arms, Assam and West Bengal have new challenges in the form of cattle and counterfeit currency smuggling. At the same time, a Union Home Ministry official dismissed the allegations of the state governments, saying that the sole purpose of this notification is to improve the operational efficiency of the BSF and help them in cracking down on smuggling rackets.

The new amendment to the BSF Act will empower the force to apprehend any person who has committed an offense under these laws. According to the order, Border Security Forces will continue to exercise these powers throughout the region in Manipur, Mizoram, Tripura, Nagaland and Meghalaya and in Jammu and Kashmir and Ladakh.

46% of Indians borrowed money to run a home during the Corona period, 1 out of 4 people took a loan from friends to...

Mahindra will launch new Bolero in the coming time, know how this SUV will change now