PM’s niece did not get BJP ticket for civic polls 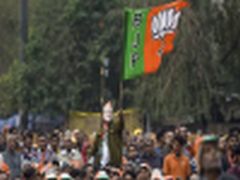 Sonal Modi, niece of Prime Minister Narendra Modi, has failed to get the Bharatiya Janata Party ticket for the Ahmedabad CivicBow D (Municipal Corporation) election. Let us know that the Bharatiya Janata Party released a list of its candidates for the upcoming election of Ahmedabad civic body elections on Thursday, but Sonal Modi is not named in it. BJP has cited new rules for candidates when Sonal Modi is not named. Let me tell you that Sonal Modi is the daughter of Prahlad Modi, brother of Prime Minister Narendra Modi, who runs a ration shop and is also the president of Gujarat Fair Price Shops Association.

On Tuesday, Sonal Modi told reporters that he has sought a ticket from the BJP to contest from the Bodakdev ward of Ahmedabad Municipal Corporation (Bodakdev) or any other ward. Significantly, the Gujarat BJP recently announced that relatives of party leaders will not be given tickets in the upcoming elections. Along with this, BJP also said that tickets will not be given to those who are more than 60 years of age and who have completed 3 terms as councillors. However, Sonal Modi claimed that he had sought a ticket as a BJP worker, not being the niece of the Prime Minister.

Sonal was not made a candidate from Bodakdev or any other ward in the list released by the Bharatiya Janata Party on Thursday. When BJP state unit president CR Patil was asked about not giving tickets to Sonal Modi, he said that the rules are equal for everyone. Let us know that a total of 6 municipal corporations, including Rajkot, Ahmedabad, Vadodara, Surat, Bhavnagar and Jamnagar in Gujarat will be voted on February 21, while 81 municipalities, 31 district panchayats and 231 taluka panchayats will be voted on February 28. .

Prahlada had endorsed his daughter’s decision in Modi, saying that all of his family are free to make their own decisions. These are not a matter of familyism or nepotism. My family has never used PM’s name for their personal interests. We all collect our bread with our hard work.

What happened between shooter Manu Bhaker and Air India that Kiren Rijiju had to come directly to solve the case?

6 signs that say that you are an overthinker, know how to break this cycle?

Corona Vaccine: Now Corona’s single dose vaccine will be installed in the country, Johnson & Johnson’s vaccine has been approved