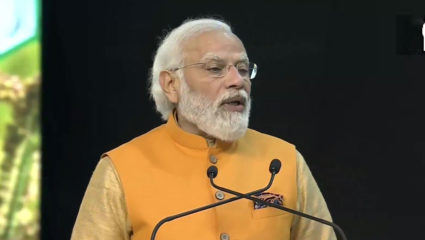 Hyderabad: Prime Minister Narendra Modi arrived in Hyderabad on Saturday to attend the 50th anniversary celebrations of the International Crop Research Institute for the Semi-Arid Tropics (ICRISAT). Where the PM inaugurated the Climate Change Research Facility and also released a postage stamp. During this, while addressing the people there, the PM said, “His government is working for 80 percent of the small farmers of the country. At the same time, we are focusing on nutrition security along with food security.

The Prime Minister said, “ICRISAT has over 5 decades of experience in helping other countries make agriculture easy and sustainable. Today, I hope they continue to lend their expertise to strengthen India’s ‘agriculture’ sector.”

He said, “India has set a net-zero target by 2070. We have also highlighted the need of a lifestyle for the environment and called for the Pro Planet People Movement – ​​a movement that is important to tackle climate change and connects every individual to the climate.”

India has set a target of Net-Zero by 2070. We have also highlighted the need for life- lifestyle for the environment and also called for a Pro Planet People movement – ​​a movement that is crucial to combat climate change and connects every individual with climate : PM Modi pic.twitter.com/okNTR4vI4h

Prime Minister Modi said, “In the next few years, we want to take the acreage in the palm oil field to 6.5 lakh hectares…we are focusing on food security as well as nutritional security. We have developed many bio-fortified varieties in the last 7 years.”

Talking about farmers and agriculture, PM Modi said, “To save our farmers from the challenge of climate, our focus is on fusion of both Back to Basics and March to Future. Our focus is on more than 80 percent small farmers of the country, who need us the most. The Union Budget 2022-23 focuses on natural farming and digital agriculture.

To save our farmers from climate challenge, our focus is on the fusion of both back to basics and march to future. Our focus is on more than 80% of small farmers of the country who need us the most. The Union Budget 2022-23 is focused on natural farming & digital agriculture: PM pic.twitter.com/9lASlJMaj8

Union Agriculture Minister Narendra S Tomar said, “This year India is celebrating ‘Azadi Ka Amrit Mahotsav’ and ICRISAT is also completing 50 years. Both the opportunities give us the inspiration and opportunity to make resolutions for the next 25 years.”

He said, “Once upon a time it was called ‘Jai Jawan, Jai Kisan’. When Atal Bihari Vajpayee became the Prime Minister, he added ‘Jai Vigyan’ to it and now with the initiative of Prime Minister Narendra Modi, a new slogan ‘Jai Anusandhan’ has been added to it.