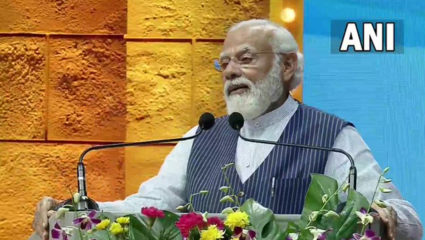 Panaji: Prime Minister Narendra Modi is in Panaji on the occasion of Goa Liberation Day. Where he attended the Goa Liberation Day celebrations held at Dr. Shyama Prasad Mukherjee Stadium. During the ceremony, PM Modi said, the land of Goa, the air of Goa, the sea of ​​Goa, have got a wonderful gift of nature. And today this enthusiasm of all, the people of Goa, is adding to the pride of liberation in the winds of Goa.

PM Modi said, today Goa is not only celebrating the Diamond Jubilee of its liberation, but the memories of this journey of 60 years are also in front of us. We also have a saga of struggle and sacrifices before us, the results of the hard work and dedication of lakhs of Goans, due to which we have come a long way. Goa went under Portugal at a time when the Mughal sultanate was ruling over a large part of the country. After that, this country has seen so many political storms, how much power has been slammed.

Goa came under Portugal rule when the other major part of the country was ruled by the Mughals. But even centuries later, neither Goa has forgotten its Indianness, nor India has forgotten its Goa: PM Modi pic.twitter.com/JMzjkv2yjh

Goa has not forgotten its Indianness

PM Modi said, ‘Goa came under Portuguese rule when other major part of the country was ruled by Mughals. But even after centuries, neither Goa has forgotten its Indianness nor has India forgotten its Goa. He said, India is such a spirit, where the nation is above the ‘self’, is paramount. Where there is only one mantra – nation first. Where there is only one resolution – Ek Bharat, Shreshtha Bharat.

PM Narendra Modi in Goa: With the character of Manohar Parrikar ji, the country has seen how honest, talented and hardworking the people of Goa are. During his life, we saw how one can remain devoted to his state, his people till his last breath.

The country through the character of Manohar Parrikar Ji saw how honest, talented, and hardworking the people of Goa are. Through his life, we saw that how one can remain devoted to his state, his people till his last breath: PM Narendra Modi in Goa pic.twitter.com/5hxp8kHhV3

If Sardar Patel sahib had been alive….

PM Modi said, 31 Satyagrahis had to sacrifice their lives in the Satyagraha of Goa Mukti Vimochan Samiti. Today I will also say on this occasion that if Sardar Patel had lived for a few more years, Goa would not have had to wait so long for its liberation. He has also said that I had gone to Italy and Vatican City some time ago. There I also had the opportunity to meet Pope Francis. I invited him to come to India, to which Pope Francis said “the greatest gift you have given me” is his love for India’s diversity, our bright democracy.

Some time ago, I went to Italy and Vatican City. There I also had the opportunity to meet Pope Francis. I invited him to visit India, to which Pope Francis said “This is the greatest gift you have given me” This is his love for India’s diversity, our radiant democracy: PM Modi pic.twitter.com/9aWMiv5GYq

Significantly, first Prime Minister Narendra Modi paid tribute to the martyrs at the martyr memorial at Azad Maidan. After which he also became a part of the cell parade and flypast organized on the occasion of Goa Liberation Day at Miramar Beach. Here PM Modi also inaugurated projects worth about Rs 600 crore. These include the inauguration of the revamped Fort Aguada Prison Museum, Super Specialty Block at Goa Medical College, New South Goa District Hospital, Aviation Skill Development Center at Mopa Airport and Gas Insulated Sub Center at Davorlim-Navelim, Margao.

Gold price today: Gold prices on MCX are at a low of 2 months, know whether you should buy now

Setting a new record, 1,45,384 new cases have been reported in India during the last…