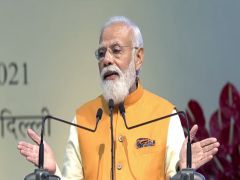 On the occasion of the launch, the Prime Minister said that PM Gati Shakti-National Master Plan will give Gati Shakti to 21st century India. The next generation infrastructure and multi-modal connectivity will get the impetus from this national scheme. He said that with the resolve of self-reliant India, we are building the foundation of India for the next 25 years. PM Gati Shakti National Master Plan is going to take India’s self-confidence, self-confidence to the resolution of self-reliance.

The PM said that today the 21st century India is moving ahead leaving behind the old thinking of government systems. We have not only developed a work culture of completing the projects within the stipulated time frame but today efforts are being made to complete the projects before time. He said that the subject of infrastructure in our country has been away from the priority of most political parties. This is not even visible in his manifesto.

According to Prime Minister Modi, after the start of this scheme, now no infrastructure project in the country will get stuck, will not hang, nor will it go astray, that is, it will not happen that if one agency builds the road, then the other will rebuild the road built for laying cables or pipes. Dig out and go. Such instances are often seen due to the lack of coordination between different ministries, departments and agencies of the government.

The government has launched this National Master Plan for a radical change in this working style. On the occasion of the 75th Independence Day, the Prime Minister himself had announced the Gati Shakti Project from the ramparts of the Red Fort. Under this project, important infra development work will now be done through common tendering.

For example, for greenfield road, rail, optical fiber, gas pipeline, electrification, a single tender will be issued so that different agencies of the Center and the states and the local authorities as well as the private sector can carry out the work in better coordination.

For this, a group of 16 ministries, including the departments for creating railways, roads, highways, petroleum, telecom, aviation and industrial parks, has been formed. Whatever projects are going on in these ministries or are to be completed by the year 2024-25, they will be completed under Gati Shakti. States will also have the option to be a part of this common tendering. The single nodal agency DPIIT will monitor the entire project.

When the Prime Minister came to power at the Center for the first time in 2014, he had laid the foundation of this plan and formed a Group of Ministers. The idea behind this is to make business and life easier i.e. Ease of Doing as well as Ease of Living. The objective is to complete the projects on time, keep costs low, increase business and give investors confidence that capital will not sink due to non-approval. The government hopes that the common tendering process will prove to be a game changer.

Do not bother to raise money in emergency, these 3 options can be arranged

WhatsApp Chats Leak: the phone is exposing you without your knowledge!