Plan to break Bandra Skywalk, 14 years ago MMRDA had constructed 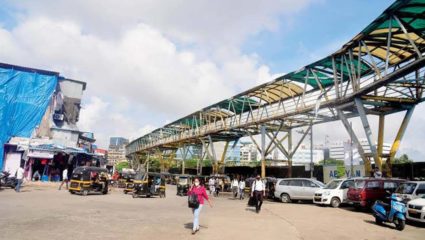 Mumbai: Plans have been made to demolish the 14 year old skywalk connecting BKC to the station in Bandra East. It is noteworthy that in 2007-08, MMRDA constructed the said skywalk and later handed it over to BMC for maintenance.

At present, this skywalk has reached a dilapidated state. It was told that BMC has made a plan to demolish it and rebuild it. A proposal of Rs 18.69 crore has been prepared for this.

The flyover was made of steel, so it became dilapidated due to pollution and the salty bad air of the Gulf. A part of this skywalk collapsed in Bandra East during the 2019 monsoon, injuring a woman. Following this incident, an audit was ordered on the condition of several skywalks in Mumbai. The BMC was considering demolishing a part of the skywalk to make it structurally stronger, but the implementation of the plan was delayed due to the lockdown.

Skywalk was closed since 2019

The skywalk has been closed to the general public since 2019. After this, the BMC appointed a technical consultant and asked to prepare the draft, outline, plan and budget of the flyover. As per the consultant, an estimated cost of Rs.16.20 crore has been fixed and tenders have been floated. Eight companies have shown interest in the bid. Of these, M/s N A Construction Private Limited is ready to do the work at 2.49 crores less than the estimated cost. BMC has given priority to this company. BMC has asked the company to keep 1 per cent of the total cost with BMC as security deposit. The construction company has to complete its work within 18 months.

It was informed that MMRDA has constructed 23 skywalks in the city. About Rs 700 crore was spent on its construction and an amount of about Rs 2.5 crore has been spent on annual maintenance. Most of the skywalks have become dens of drug peddlers and anti-social elements. Recently, Guardian Minister Aslam Shaikh had alleged that public money has been wasted in MMRDA’s Skywalk scheme. The need for skywalk should be reviewed by appointing a special panel headed by IIT Bombay or VJTI Professor and an Additional Chief Secretary (Urban Development).

For the first time in 75 years, the Republic Day parade will start 30 minutes behind the scheduled time, know the reason