People of Irani gang, who stole people’s jewelery posing as police in Pune, arrested in Thane 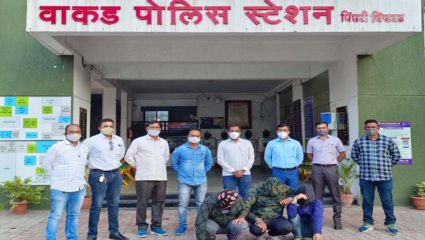 Pimpri: The Wakad Police of Pimpri-Chinchwad has got success in cracking down on the Irani gang that steals people’s gold jewellery, saying that there has been a further incident by claiming to be the police. Three members of this gang have been arrested and a jewellery, a two-wheeler and a mobile phone have been recovered from them. So far seven incidents have come to light from this gang.

Haider Tehzeeb Sayyed (55), Yunus Sabur Sayyed (46), Ghazi Rafiq Jafri (35) are the names of the members of the Iranian gang who were arrested. His fourth accomplice named Haider alias Langda Pappu Sayyed alias Irani (35) has absconded. The police is on the lookout for him.

Laxman Vitthalrao Deshmukh (64) had lodged a complaint with the Wakad police regarding an incident that took place in Rahatni’s Konkane Chowk on the afternoon of January 4. Deshmukh was on his way home after buying sweets from a sweet shop. At that moment three strangers came to him. Two of them pretended to be policemen and managed to convince Deshmukh. Deshmukh’s jewelery was removed from his hands on the pretext of keeping it in a safe bag. After that a third stranger drew Deshmukh’s attention elsewhere and the three snatched 55 grams of gold jewelery worth Rs 2 lakh 20 thousand from Deshmukh.

Three more such cases were registered at Wakad police station. The Wakad police were investigating these crimes. For this, the police had formed three squads. The police concluded from CCTV and criminal proceedings that the accused belong to the Irani gang. Initially, Wakad police went to Patil Estate in Pune and Irani settlements in Loni Kalbhor and interrogated them. However, the accused were not from there but from Thane. Meanwhile, a CCTV footage shows the accused walking towards Mumbai. After this the Wakad police left for Thane.

All the accused are residents of Irani Basti Ambivali.

In this incident, the possible accused Haider Syed turned out to be a vicious criminal. Along with this it was also learned that all the accused are residents of Irani Basti Ambivali, where the women of Irani Basti are aggressive and oppose the police squad, while any male accused is being taken out of Ambivali Basti. Many a times the question of law and order arises during such arrests. Therefore, it was a challenge for the Wakad police to arrest such accused. Two squads of Wakad police reached Thane. After that the local police searched for the accused from Khadakpada police station in Ambivali area regarding information officers, but initially the police failed.

The police conducted technical analysis and traced the whereabouts of the accused. Police got information that the accused were sitting behind a hotel in Baneli. Both the police teams raided and arrested both of them. However, as soon as the police arrived, one of them fled and hid in a marshy area. The police found him in a marshy area and arrested him. Now the police is looking for his fourth accomplice. 125 grams of gold ornaments, a two wheeler and mobile phone worth Rs 6 lakh 22 thousand have been recovered from the arrested accused.

A total of seven incidents were exposed

If you want more income in less expenditure, then start the journey of farming with the cultivation of Lemongrass and Khus

Short Video Quibi Shuts Down 6 Months After Being Launched