Pakistan: Traumatic accident in Khyber Pakhtunkhwa, a van full of passengers fell into the Indus river below the mountain, 17 people died 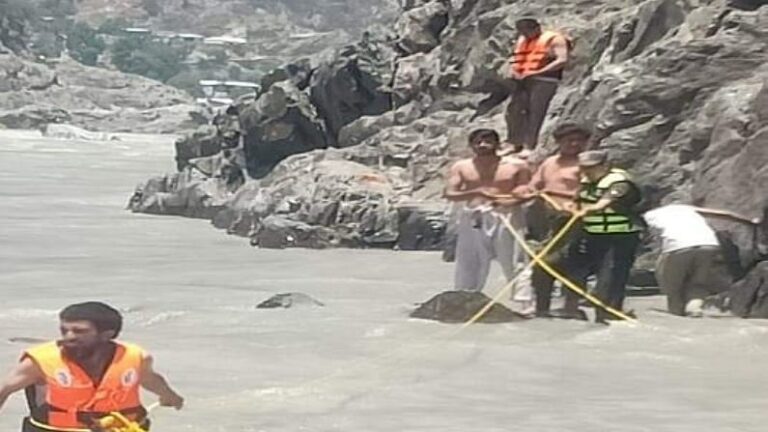 It was told that this accident happened when the driver took a sharp turn. But during this the driver lost control of the van, due to which the van full of passengers fell into the river.

Rescuers engaged in searching the dead bodies after the accident (Twitter)

A painful road accident has once again occurred in Khyber-Pakhtunkhwa, the mountainous province of Pakistan. Here a van full of passengers fell into the river. At least 17 passengers died in this accident. According to the report of Pakistani newspaper Dawn, the van was going from Chilas to Rawalpindi, during which it fell into the Indus River in Paniba area of ​​Kohistan district. There were 17 people in this van including the driver and it was privately booked for travel by a family.

It was told that this accident happened when the driver took a sharp turn. But during this the driver lost control of the van, due to which the van full of passengers fell into the river. Police said the van turned towards the Indus river and then sank after falling. It further stated that all 17 people were killed in this incident. Rescue teams are trying to locate the missing passengers. But due to the difficult terrain and the depth of the river, they are facing hurdles. Roads connecting the northern regions of the country pass through some of the most dangerous mountains, where accidents are frequent.

Earlier, on Sunday, a painful road accident also occurred in Mansehra district of Khyber Pakhtunkhwa province. Actually, a minivan fell into the Siren river from the mountain road. Seven people died and three others were injured in this accident. Rescue service spokesman Ahmed Faizi said the bodies of two women, a child and four men were recovered. At the same time, three injured children were admitted to a hospital in Phulra town. Bad condition of roads and non-compliance of traffic rules are often the cause of accidents.

At the same time, on Friday last week, 10 people were killed in Pakistan in two separate road accidents, while 16 people were badly injured. An accident happened in Khairpur district of Sindh province. Here a speeding car and bus collided, in which six people died and 16 people were injured. The accident happened due to bursting of tire of the car. After getting information about the incident, the rescue workers reached the spot. At the same time, the second accident happened on the Ferozepur Road in Lahore. Here a bus and a motorcycle collided. In which 4 people died. All the four deceased belonged to the same family.

Q: Ira, I discover it virtually ridiculous when Heat followers are nonetheless speaking about now…

Jewellers and watchmakers grapple with when to enter the metaverse