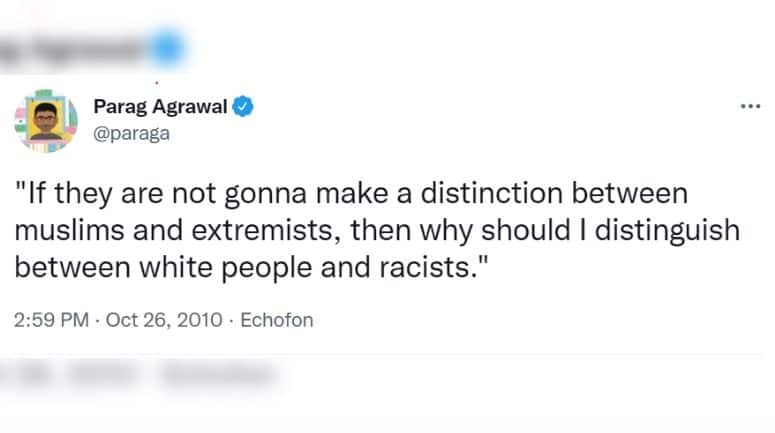 After the resignation of Jack Dorsey, the reins of Twitter have now been handed over to Parag Agrawal of Indian origin. But it is also a matter to think that the social site company where Parag has taken over as CEO, is now being trolled on the same social site for an 11-year-old tweet of his. Users are calling Parag ‘racist’ through this old tweet.

This tweet was posted by Agarwal in 2010, when he did not even work for Twitter. In this, he cited a comedian who made fun of racism and Islamophobia in America. Parag Aggarwal had talked about Muslims, extremists, whites and racism in this, but now it is being interpreted differently.

However, soon after posting the tweet, Agarwal replied to a user that he was quoting comedian Asif Mandvi of The Daily Show. Many comedians participated in this program and there was talk about the rights of black people.

In fact, this new controversy started when a right-wing website Breitbart raised this tweet on Monday and it was feared that Agarwal had supported racism.

It also presented an earlier interview given by the new Twitter CEO to MIT Technology Review and claimed that free speech was not the company’s focus.

However, several other users also defended Agarwal, including Andrew Kaczynski, a CNN reporter. He posted the original clip of Mandvi’s interview, which shows that the comedian actually made such a comment.

Parag, 37, was named CEO of Twitter by Jack Dorsey. Jack left this position of the company after 16 years. With this new high, Agarwal has now become the youngest CEO in the S&P 500.

Tata Communications shares plummeted by 8% even after profits increased by 5 times, what is the matter

Somewhere freedom from masks, someone opened their doors, the country where fully vaccinated people are welcome