On the day of expiry, the mood of the market is bad, Sensex breaks up to 600 points, know the reason? 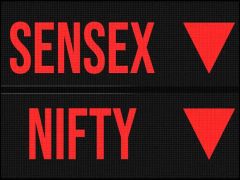 Now the question is what is the reason for this decline? Let’s try to find the answer.

VK Vijayakumar of Geojit Financial Services Says that rising inflation in the global market, at least for the short term, has become a cause of great concern. Consumer price inflation in the US reached its 30-year high in October, up 6.2 per cent year-on-year. Similarly, core inflation has risen to 4 per cent. This figure is much higher than expected.

On the other hand, producer price inflation in China has risen to 13.5 per cent. Its effect will be seen in the form of rising global commodity prices.

According to a news from the Associated Press, 66.5 percent of the people are of the opinion that the US Fed will increase its interest rates by the end of June. Just 1 day before this, 50.9% people agreed with this. The US Fed has kept its interest rates around a record low of about 0 percent since March 2020 to help the economy and the market recover from the shock of the Corona epidemic.

To boost the economy, it also started a bond buying program under which the US Fed used to buy a certain amount of bonds to keep interest rates low. Now with the improvement in the economy, the possibility of a cut in bond program purchases is increasing.

VK Vijayakumar says the 10-year bond yield has come down to 1.57 per cent considering the potential for further risk. The US Fed still believes that the reason for the rise in inflation is supply-related problems. So this is a temporary problem, but there are many who believe that in the end, the Fed will have to cut the bond buying program along with raising interest rates to tackle inflation. If such a situation comes, then there will be a sharp decline in the markets around the world. Given this, investors are looking cautious.

Manish Hathiramani of Deen Dayal Investments says that technically if Nifty slips below 17700 and 18000 then it may see further decline in near term.

Know when and why ‘International Neutrality Day’ is celebrated