Number of corona infected increasing in the district, number of active patients exceeds 200 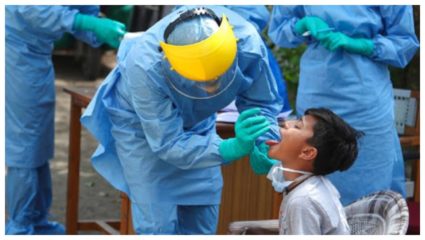 Gadchiroli, The third wave of Corona has created a ruckus in the state. In the tribal-dominated Gadchiroli district settled at the extreme end of such a state, the situation is visible for the past few days as the third wave of Corona has entered. Since the last week, the figures of infected people are seen increasing in the district. Today on Tuesday, 74 coronas have been found infected in the district.

Today, 74 new coronas have been found infected in 1249 corona tests conducted in the district on Tuesday. At the same time, 23 patients have become corona free. The new infected found today include 50 from Gadchiroli tehsil, Armori 4, Bhamragad 1, Chamorshi 10, Dhanora 2, Etapalli 5, Sironcha 1 and 1 patient from Desaiganj tehsil. At the same time, out of 23 patients who were corona-free today, 10 patients from Gadchiroli tehsil, 11 from Aheri, 1 patient each from Chamorshi and Dhanora tehsils are included.

The number of disruptors in the district has reached 217 in a week. If we look at the figures of the infected for a week, then the corona situation in the district seems to be taking a serious turn. On Tuesday, there were 13 active patients with 3 infected in the district. 24 interrupted on 5 January, 48 on 6 January, 38 on 7 January, only 4 on 8 January, 30 on 9 January, 22 disrupted on 10 January, so today on Tuesday 11 January there has been an increase of 74 corona patients. In a short span of time, this increasing number seems to be increasing the concern of the administration along with the health department.

The number of corona patients is continuously increasing in the district. In such a situation, not a single infected has been registered so far in Korchi tehsil of the northern end of the district. Due to which currently Korchi tehsil is corona free. So far 955 total infected were found in this tehsil. In which 943 patients have become corona free. At the same time, 12 patients have died due to corona.

In the first phase, medical colleges will be ready on PPP model in Maharajganj and Sambhal district