Now the Myanmar army is trying to break the back of political parties! Petrol bomb attacked Suu Kyi’s party headquarters 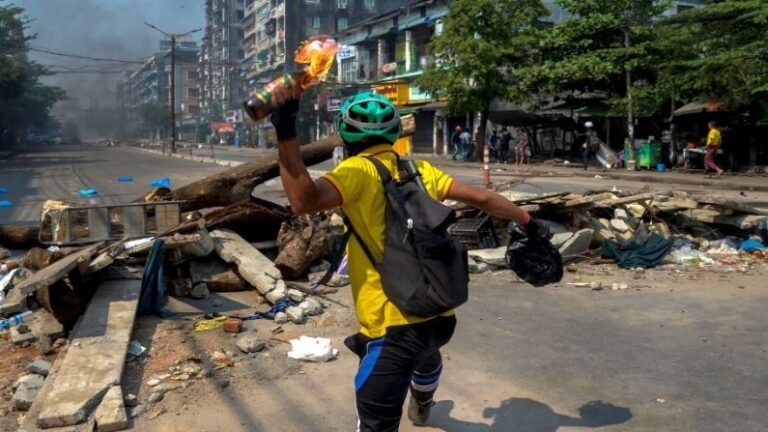 Aung San Suu Kyi’s party National League for Democracy (NLD) headquarters in Yangon has been attacked with a petrol bomb.

The party headquarters of Aung San Suu Kyi in Yangon, Myanmar, has been bombed. A party official has given information about this. The headquarters was attacked with a petrol bomb. Significantly, on February 1, the army arrested the Nobel Laureate Suu Kyi in a military coup. Since then, protests have been going on all over the country. A large number of people are protesting on the streets to restore democracy.

Since the coup, Suu Kyi’s party National League for Democracy (NLD) has been disorganized. Some of its elected MPs are hiding to avoid the army. It is reported that at 4 am on Friday morning an attacker attacked the headquarters located in Yangon with a petrol bomb. It caught fire. In-charge of the headquarters and NLD member So Vin said that when the people living nearby got information about the fire, they called the fire department to extinguish it. It was controlled by 5 o’clock in the morning.

So Win told that it seems that the headquarters was attacked with a petrol bomb. Only the entrance portion of the office has been damaged in this attack. Party members are present inside the headquarters and are estimating the damage. They said, we have lodged a complaint with the police. We do not know who has done this, but it is not tolerable. The incident took place on the eve of Armed Forces Day, when the army would perform a vigor with its annual parade. There is a possibility that demonstrations may increase on this day.

For the first few weeks after the military coup, this headquarters witnessed several demonstrations. After this, a large number of people started protesting on the streets. For this reason, the army has also started using force to control the protesters. Tear gas shells, rubber bullets and bullets are being fired on them. So far 320 people have died in demonstrations against the military coup. However, the army says that only 164 people have been killed in action against the protesters.

Share of new car buyers with a monthly payment of more than $1,000 hits record high

Financing a brand new or used automotive is dearer than ever, new analysis exhibits.Amid rising…