Nifty touched the historical level of 18000, know how the market may move tomorrow 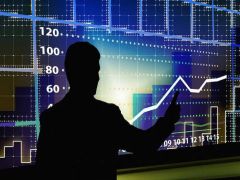 Today was a day of record breaking rally in the market, Nifty touched the historical level of 18000, however later there was some profit-booking and Nifty closed at 17,946. Bank Nifty also reached a record high today. Nifty completed its historic peak in 28 sessions. Nifty Bank climbed 519 points to close at 38,294. At the same time, the midcap climbed 193 points to close at 31,631.

K S Ranganathan of LKP securities Says that Nifty today crossed the peak of 18 thousand in the leadership of Reliance, Auto and Power shares. However, today there was profit recovery in IT stocks throughout the day. With support from Nifty PSE stock, broader market movements also witnessed a strong rally today. However, in the post-afternoon trading session, profit-taking was seen due to concerns related to earnings.

Nifty formed a Bullish candle with long upper shadow on the Daily Frame today as profit-taking was witnessed in the last trading hours. Motilal Oswal’s Chandan Tapadia Says that Nifty will now have to stay above 17,950 to know towards 18,100 -18,200. On the downside, support is visible in the zone 17777 -17650.

How will the market move tomorrow?

Shrikant Chauhan of Kotak Securities Says that the market has formed a shooting star pattern at the top of the rally which is a sign of uncertainty in the market. Now the strategy has to be worked out from the weak stocks around the resistance of 17,980-18,040 and 18,080. If Nifty sees a positive reversal after hitting the support located in the zone of 17,850 -17,810, then it would be advisable to buy. On the other hand, if the Nifty closes below 17,800, then the level of 17,600 can also be seen on the downside.

Mohit Nigam of Hem Securities It is said that today the market saw an increase for the third consecutive day. Today, the Nifty gained 0.28 percent and the Sensex 0.13 percent. Nifty touched the 18,000 level for the first time. At the same time, the Sensex closed above 60,000 today. On the technical front, indicators like RSI and MACD are indicating that Nifty 50 will continue to remain strong and may touch 18,200-18,300 levels in the near term. For this, there is strong support at the level of 17,700. At the same time, at 18,200 it may face immediate resistance.

Ashish Biswas of CapitalVia Global It says that now it will be very important for Nifty to stay above 18,000-18,030 in the short term. If Nifty manages to stay above 18,000, then it can see the level of 18,250. Momentum indicators like RSI and MACD are indicating that further bullish momentum will continue.

Get so many benefits from Neem leaves, learn to apply on the skin

Rs 30 crore fine for tampering with car, along with 5 years in jail, the whole matter will surprise