Negligence being taken in demolishing the dilapidated building, the walls of the houses were broken due to falling debris 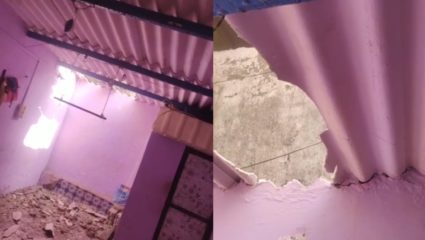 Ulhasnagar : The building named Sai Empire located at Amardham Chowk, OT section of local camp number 2, was declared Dangerous two years ago i.e. in July 2019. Now the work of breaking it has been started from Saturday.

At the time of demolition, it is the condition of the administration’s inadequacy that due to the falling of debris on many nearby houses, the letters were broken, the furniture inside the houses was broken, the houses of the poor were scattered. There is anger among the local people and there is also the fear of being homeless. Any accident can happen, women children and old people live in homes. Despite the complaint, the municipal authorities are not paying any attention. Now the local people are expected from the local public representatives to pay personal attention to ensure that the debris does not fall on the houses around it while demolishing the dilapidated building.

Action continues in Kalyan too

Tesla’s supercharger reaches base camp of Mount Everest, know how to charge at 17,000 feet