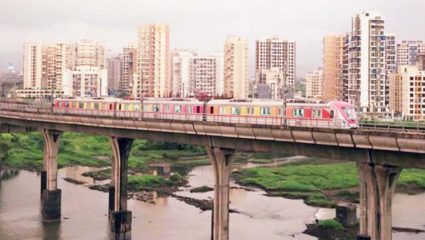 Navi Mumbai: The safety trial will start from Monday between Kharghar’s Central Park to Taloja’s Pendhar on Line-1 of Navi Mumbai Metro running from Belapur to Pendra in Taloja. The trial will be conducted by the Commissioner of Metro Railway Safety (CMRS). This trial will take place on the 5.14 km metro line from Central Park in Kharghar to Pendhar in Taloja. This trial will be done with the empty compartment of the metro, with a heavy load as much as the full passenger capacity. Along with this, there will be a test of depot, undergear, fire, smoke, safety of passengers, sound etc.

It is worth noting that the Navi Mumbai Metro Line-1, being developed by CIDCO, covers a distance of 11.1 km from Belapur to Pendra (Taloja). There are total 11 metro stations on this route. In the first phase on this route, the preparations for starting the Metro service from Central Park in Kharghar to Pendra in Taloja are almost complete. For which security trials will be conducted from Monday. There are 5 metro stations between this distance of 5.14 km. After the start of this service, Metro service will start between Kharghar’s Central Park to Belapur.

Rent will be minimum 10 rupees and maximum 40 rupees

It is worth noting that the information about Navi Mumbai Metro fare was given by CIDCO MD Dr. Sanjay Mukherjee on Twitter. In which he wrote that the minimum fare for 2 km on Navi Mumbai Metro’s Line-1 will be Rs 10, while the fare for 2 to 4 km will be Rs 15. Sanjay Mukherjee wrote in his tweet that after 4 km the fare will increase by Rs 5 for every 2 km, for a distance of more than 10 km on this route, the fare will be 40 rupees.

It is very important to obtain a certificate of safety from the CRMS for starting the Metro service in the first phase of Line-1 of Navi Mumbai Metro. After getting this certificate, the dream of the citizens of Navi Mumbai to travel in the metro will soon come true.

Israel Gaza conflict: Israel has 80 Airstrikes in Gaza, so far 200 people have died, read all updates

The conflict between Israel and Gaza continues, in which around 200 people from both sides…

US hiring stayed strong in November as employers add 263,000

Skoda is going to launch new vehicles in India soon. The company believes that the…