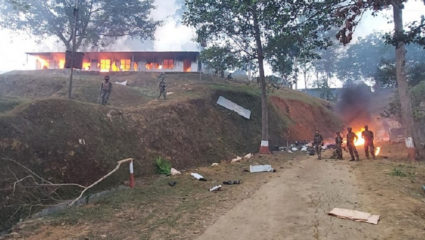 Kohima: Top organizations of the Konyak tribe in Nagaland have announced certain rules, including “strict non-cooperation” with the military. The organizations have said people will abide by these rules until justice is served in the killing of 14 civilians in a failed operation by security forces in the north-eastern state earlier this month and subsequent incidents. .

Of the 14 killed in three incidents of firing by army personnel on December 4 and 5, 13 belonged to the Konyak tribe, one of the major tribes of Nagaland.

The Konyak Union, the apex body of the tribals, said in a joint statement that the Konyak Nyupuh Sheko Khong and the Konyak Students’ Union asked the tribal group members not to participate in any army rally and not to receive any package or help from the armed forces. Is.

“A complete ban on Indian military convoys and patrolling on Konyak soil will continue until justice is brought to the 14 innocent Konyak youths who were killed,” the statement said.

The Konyak bodies directed all customary landlords to immediately terminate previous land agreements to establish army base camps under their jurisdiction.

Konyak bodies urged citizens to refrain from participating in fun-filled activities like picnics in Mon district. However, pre-scheduled events such as weddings and church events are allowed. He also demanded the state government to take responsibility for the medical treatment and security of the two survivors of the December 4 firing.

Night Shift Brewing in Everett is laying off workers because of CO2 supply issues: ‘This was pretty awful news to get’

When will record-high fuel costs go down in Massachusetts? ‘The million dollar question’

During its mission, Europa Clipper will take high-resolution images and search for lakes beneath the…