Mumbai’s local train is getting crowded 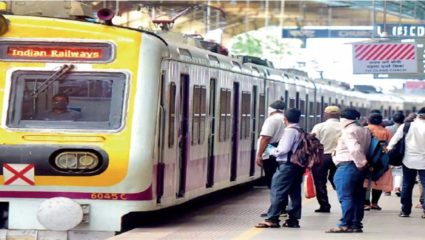 Mumbai: Corona cases in Mumbai have once again increased rapidly. The local train, which is called the Lifeline of Mumbai, is getting crowded as usual. People are traveling by hanging in trains and buses under the shadow of the third wave. It is noteworthy that those taking both the doses of the vaccine have been given permission to travel locally. In view of the third wave in Mumbai, people are being advised to avoid congestion, but seeing the ruckus of local trains, it does not seem that Mumbaikars are taking it seriously.

Most of the passengers say that when both the doses have been taken, then there is no reason to worry. At this time there is a lot of cold and cold along with cold. A senior railway official said that local people are also responsible for motivating people to take both the doses in Mumbai. A large number of people came forward and took both doses of the vaccine for the permission to travel locally. It has also had a good effect. In the third wave of Corona, the situation of local closure has not come yet. Although the announcement is being made not to travel in the local without urgent work, despite this, the workers are not ready to accept it. There is a fear that this crowd may not work to increase the third wave of Corona.

More than 65 lakh people travel daily by local, the cheapest and accessible mode of transport for Mumbaikars. 38 lakh people are traveling daily by Central Railway and 27 lakh by Western Railway local. 1375 local ferries are running on Western Railway, while 1725 ferries are running on Central Railway. Instructions have been given to strictly follow the masks and other covid protocols in the railways. Action is also being taken against those without masks.

Given the lack of oxygen, Chinese companies are helping, now this company has given 2 crore rupees