Mumbai Police in the grip of Corona, 329 personnel infected in 48 hours; 126 deaths so far 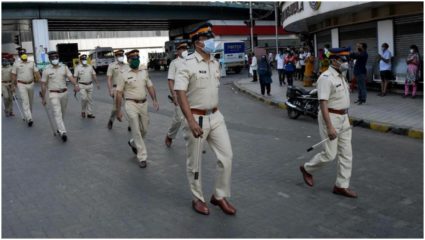 Mumbai. Coronavirus is spreading like a tsunami in Maharashtra. This deadly virus is taking its grip on the common citizens as well as the police personnel. Meanwhile, in the capital Mumbai, 329 policemen have been found corona positive in the last 48 hours. With this, the number of active patients has increased to 1,102. Mumbai Police has given this information on Thursday.

It is to be known that so far 265 policemen have lost their lives to Corona in Maharashtra, out of which 126 deaths have occurred in Mumbai Police. At present, there are 2,145 active cases of corona in the state police, out of which 1,102 are from Mumbai Police alone.

In the capital Mumbai, 13,702 new cases have been reported in the last 24 hours, while 6 patients have died. After which the total number of infected has increased to 9,69,989. While the death toll has reached 16,426.

At the same time, 20,849 people have recovered from this dangerous virus in Mumbai in the last 24 hours. With this, the number of people recovering from corona has increased to 8,55,811. The recovery rate in the city has been recorded at 88 percent today. At present there are 95,123 active patients in the city and all are undergoing treatment.

Potato acreage will increase, farmers get excited after getting good price

Israel on Muslim countries’ targets for violence in Al-Aqsa Mosque, ‘hurt the sentiments of Muslims around the world’