Mumbai Cruise Drugs Case: “Not even a gram of drugs was found, the whole case is fake”, Minister Nawab Malik raised questions on NCB’s raid 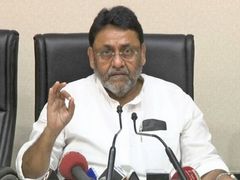 Maharashtra government minister and NCP leader Nawab Malik held a press conference on Wednesday, where he alleged that the NCB’s raid on a luxury cruise liner last week was “fake”. A total of eight people, including actor Shah Rukh Khan’s son Aryan Khan, were arrested by the Drug Enforcement Agency during raids on Saturday. Nawab Malik alleged, “There was no seizure of drugs on the cruise. All the pictures released have been clicked at the NCB office.” The Nationalist Congress Party (NCP) leader alleged that the aim of the NCP was to “frame” those arrested in connection with the case.

Nawab Malik said, “This is a complete forgery. Not even a gram of drugs was seized in the ship, neither on the terminal nor from whom. The place where the raids are conducted, the Panchnama is done, but there is no Panchnama.” NCB forged to frame.”

Malik further said, “Aryan Khan’s arrest is fake. For the past one month, information was being circulated to the crime reporters that the next target is actor Shah Rukh Khan.”

He said the Narcotic Drugs and Psychotropic Substances (NDPS) Act was brought in to curb drug use. Consequently, a central agency, the NCB, was created to ensure an interstate crackdown on the drug trade.

The minister said, “NCB is active in the country for the last 36 years and has busted several domestic and international drug rackets. There has never been any doubt about the agency’s work throughout that time. All the aware citizens and political parties have always supported NCB. Respected and everyone wants that drug and drug trade should be ended in the country.”

The NCP leader told the media that a person named “KP Gosavi” was seen bringing Aryan Khan to the NCB office in Mumbai. Referring to a viral photo, Nawab Malik said, “Gosavi also clicked a selfie with Aryan Khan. NCB issued a statement saying that he has nothing to do with NCB.”

Nawab Malik asked, “NCB should clarify what is KP Gosavi’s relation with NCB? What was he doing during such high-profile raids.”

The final seal on the purchase of fighter aircraft Tejas will be sealed today, HAL shares got wings