Minister Chhagan Bhujbal said in Yevla, farmers will benefit from the winery industry 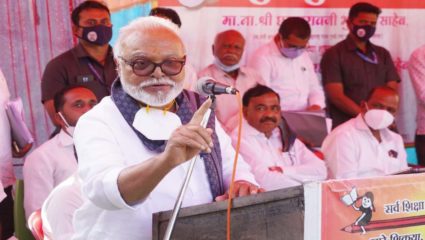 Yevala: The state government is encouraging the development of the winery industry for the benefit of the farmers. This will increase the income of the farmers and speed up development. Food, Civil Supplies and Consumer Protection Minister Chhagan Bhujbal said that people’s participation is equally important in sustainable development. Bhoomipujan and development works were dedicated by Minister Chhagan Bhujbal in various villages of Nategaon and Yewala tehsil of Kopargaon tehsil. He was speaking on this occasion.

Minister Chhagan Bhujbal said that since Nashik is a city of grape production, Nashik district has a large number of grape growers and these grape growers are facing many problems. He said that these problems would be overcome by the decision taken by the government to promote the liquor industry. Therefore, farmers will get more benefit from this decision.

The inclusion of about 59 villages in the 38 Village Water Supply Scheme has put more pressure on the water supply scheme in Yeola Taluka. He said that separate regional water supply schemes are being started for Dhulgaon and Rajapur. So the problem of water will be solved. Bhujbal directed the concerned officers that all the development works being implemented by the government should be completed immediately. Along with this, development works were also started in the hands of Bhujbal in Nategaon of Kopargaon tehsil.

World’s second tallest person swinging between life and death, has to undergo dialysis thrice a day

The second tallest person in the world is battling a serious illness these days. Talking…