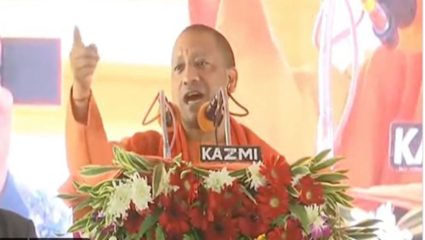 Gorakhpur: Chief Minister Yogi Adityanath has said that there is no alternative to development. Everyone has seen the changing Gorakhpur in five years. This is new Gorakhpur. A few days ago, Prime Minister Narendra Modi has inaugurated a fertilizer factory and AIIMS here. Now Metro is also going to come here soon and Sea Plane is also going to land in Ramgarh Tal. Our resolve is to take Gorakhpur to new heights of development with new enthusiasm.

CM Yogi was addressing the function organized on Wednesday evening on the occasion of inauguration-foundation of 262 development projects costing Rs 525 crore, including inauguration of new house building of corporation, unveiling of statue of Brahmalin Mahant Avadyanath, the pioneer of social harmony. Were were These development projects include Intelligent Traffic Management System (ITMS), expansion of drinking water pipeline and inauguration of several roads and laying of foundation stone for the second multilevel parking, sewerage system, Solid Waste Processing Plant and beautification work of Ramgarhtal (Naya Savera) Phase-II of the metropolis. Is.

In the inauguration-foundation ceremony, the CM said that all the people are witness to the gleaming beauty of the once neglected Ramgarh Tal. Now this rhythm will also be used as an alternative to the airport, where the sea plane will be landed. Facility will be available for Delhi-Lucknow traffic, people here will be able to travel to Banaras by sea plane only. After taking a dip in the holy stream of Mother Ganga, after seeing Baba Vishwanath, you will be able to return to Gorakhpur by sea plane.

CM Yogi said that it is a proud moment for the Municipal Corporation, Mayor, Councillors, officers, employees that the corporation has got a new house after 127 years. This is a memorable moment for Gorakhpur. It has become the grandest house building in the whole of UP. It is expected that from here the action plan of concrete development of Gorakhpur will be carried forward rapidly. The CM said that the Municipal Corporation should make detailed books based on the history and development of Gorakhpur and make it a part of the library here.

Gorakhpur will become a world class center for water sports

The Chief Minister said that today many important development projects have been inaugurated and the foundation stone has been laid in the Municipal Corporation premises. Smartphones and tablets will be distributed to the youth tomorrow. Along with this, water sports complex will also be inaugurated. CM Yogi said that Gorakhpur will become a world class center in the field of water sports through water sports complex. Referring to wide roads, arrangement of street vendors, Pradhan Mantri Awas Yojana etc., the CM said that the success of these schemes is the result of collective effort. Giving the gift of pure drinking water scheme through pipeline on this occasion, he said that this would provide pure drinking water to the population of one lakh in areas like Daudpur, Shivpur, Sahbazganj, Gopalpur etc.

Inauguration/foundation of 262 development projects costing ₹525 crore, including the unveiling of the statue of Rashtrasant Brahmalin Mahant Avadyanath Ji Maharaj in Gorakhpur and the inauguration of the Sadan Building of the Municipal Corporation… https://t.co/fntAyjDS8i

The Chief Minister first unveiled the grand statue of his guru Brahmalin Mahant Avadyanath, located in front of the Naveen Sadan building of the Municipal Corporation, amidst the sound of Damru. During this, he paid homage to Brahmalin Mahantji by laying flowers at the feet of the statue.

In the Municipal Corporation premises, the Chief Minister inaugurated the five-storey Naveen Sadan building by cutting the tape and then inspected the building. Along with launching the Intelligent Traffic Management System (ITMS) Phase One located in the same building, he also took stock of its control room. He said that ITMS would help in traffic management as well as in security of Gorakhpur.

“Smile You Are In Gorakhpur” Booklet Released

During the function, Chief Minister Yogi Adityanath released the booklet “Smile, you are in Gorakhpur”, compiled on the initiative of Municipal Corporation Mayor Sitaram Jaiswal. From the heritage of Gorakhpur metropolis to the latest developments have been preserved in this booklet.

Before the inauguration-foundation ceremony organized in the Municipal Corporation, Chief Minister Yogi Adityanath flagged off 15 of the most modern electric AC buses running in the metropolis at Shastri Chowk. The Chief Minister said that from tomorrow you can enjoy the journey of these electric buses, Gorakhpur has got a total of 25 such buses, out of which 15 will start operating from tomorrow. There is no pollution due to the absence of smoke from these electric-charged buses. The Chief Minister expressed happiness over the fact that the driver of the first electric bus in Gorakhpur is Gorakhpur’s daughter Pooja Prajapati. This is a wonderful example of women empowerment.

SBI launches ‘SIM Binding’ feature to protect customers from digital fraud, know how it will work

VITEEE Result 2022 (OUT) on vitee.vit.ac.in, Counselling for chosen candidates to start out from immediately onwards, particulars right here

VITEEE Result 2022 (OUT): Vellore Institute of Technology (VIT) has immediately introduced the outcomes of…