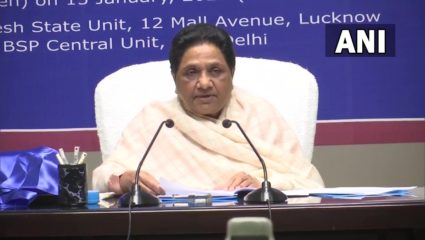 Lucknow: Bahujan Samaj Party (BSP) supremo Mayawati announced the names of the party’s candidates for 53 seats. In the West, Mayawati has posed a big challenge to the opposition Samajwadi Party and the Rashtriya Lok Dal Alliance (SP-RLD Alliance) by fielding 13 Muslim candidates. All these candidates will contest in the first phase of elections. In the first phase, polling will be held in 58 seats. BSP says that it will field candidates in the remaining 5 seats in 1 to 2 days. Voting in the first phase is to be held on February 10.

On the occasion of her birthday on Saturday, former Chief Minister Mayawati said in a press conference that her party would come to power again this time. In the 2017 assembly elections, the BSP had won only 19 seats, while the SP-Congress alliance got 47 seats. Mayawati has also released the ninth edition of her achievements book Blue Book on this occasion.

BSP has no allies

It is noteworthy that in Uttar Pradesh, where BJP and Samajwadi Party are contesting the assembly elections together with allies, on the other hand, Congress and BSP do not have any ally. Some election surveys suggest that the performance of BSP will not be good in the elections this time. However, the party’s national general secretary Satish Chandra Mishra had started trying to reunite Dalits and Brahmins in the name of conferences of enlightened society inside Uttar Pradesh a few months back.

Many old friends have left

Mayawati has single-handedly formed the government in Uttar Pradesh on the basis of this social engineering. In the last Lok Sabha elections, he contested the elections by forming an alliance with Rashtriya Lok Dal and Samajwadi Party and won 10 seats, but after the elections, he broke the alliance. In the last few months, many old colleagues of Mayawati have left her side.

Should Retail Investors Invest in Blockchain Technology Based NFTs or Not? Know its challenge and what is this complete concept