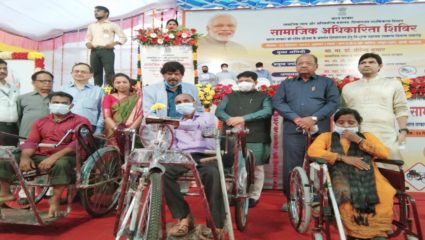 Mumbai : With the initiative of BJP MP Manoj Kotak, the Union Ministry of Social Justice and Empowerment organized a “Social Empowerment Camp” under the ADIP scheme for the empowerment of the differently-abled. In this, necessary aids were distributed free of cost to the differently-abled. Under which tricycles, folding wheelchairs, hearing aids, smart phones and other devices are included. A total of 1416 Divyangjan are its beneficiaries. All this equipment will be delivered in two days. Earlier, assessment of Divyangjan was done by setting up camps in Bhandup, Ghatkopar, Govandi.

On this occasion, Minister Ramdas Athawale said that “Today the Divyangjans were given assistive devices. The program was concluded with the tireless efforts of MP Manoj Kotak. In future, it is the plan of our ministry that we should increase the sports activities of the differently-abled and make available more funds for their welfare.

MP Manoj Kotak has said that “This program has been organized today on the eve of the birth anniversary of late Atal Bihari Vajpayee. This is the first phase of the event, which has benefited 1416 persons with disabilities. In future also many such programs will be organized with the cooperation of the workers. Thanking Prime Minister Modi, Kotak said that many welfare schemes have been started for the benefit of common people after the year 2014 due to his initiative.

For the primary three months of the season, the Yankees have been the runaway greatest…

Anthony Richardson, No. 12 Gators flop vs. Kentucky: ‘I played terrible’

A sellout crowd on the Swamp, nationwide TV viewers and 22 NFL scouts from 15…

These Pakistani leaders are beautiful of Bala, also give tough competition to Bollywood actors, see photos

There has been a long-term participation of women in the politics of Pakistan. Despite being…