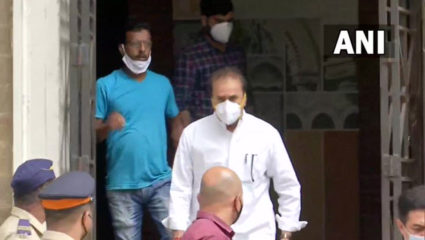 New Delhi/Mumbai. According to a big news, former Maharashtra Home Minister Anil Deshmukh has said before a Commission of Inquiry on Friday that the then Assistant Inspector Sachin Vaze has been arrested by the Mumbai Police. After he was made the head of the crime intelligence unit, he had received several complaints about him.

Yes, Deshmukh said these things to Justice K. You. Said this while appearing before the Chandiwal Commission. Let us tell you that this commission is probing the allegations that former Mumbai Police Commissioner Parambir Singh made directly on Deshmukh.

Responding to a question from this commission, Deshmukh said, “Waje was suspended for 14-15 years and after his return to service he was made the head of CIU, so I used to get many complaints about him. Usually, when a suspended officer is re-inducted, he is posted in an associate branch.

Along with this, Nationalist Congress Party leader Deshmukh also told the commission that many complaints were received orally and he could not even name the complainant. He said that he feels that the Home Department must have received complaints in writing. Deshmukh said in this regard, “Though Sachin Waje was appointed in the crime branch and later on the instructions of the then police commissioner Parambir Singh, he was also made the head of the CIU.”

He said that, however, the then Joint Commissioner of Police Santosh Rastogi had registered his objection to Waje being made the CIU chief. Responding to another question, the former minister said that he had also given a suggestion to the Chief Minister to constitute a committee to look into the false allegations made in Singh’s letter. Significantly, the questioning of Deshmukh will continue on the coming Monday as well.

Iraq: Explosion at a Football Stadium in Baghdad Leaves 10 Dead and More than 20 Injured

FacebookTwitterPinterestWhatsAppLinkedinEmailPrintTelegram Iraq: Security and medical sources report that an explosion on Saturday in east…

Hyundai is making inroads in the Indian market through its SUV models, sales are increasing every month