Maharashtra: Fierce political ruckus on Marathi board of shops, traders upset due to threats sought protection from Uddhav government 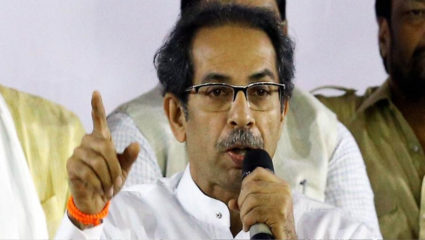 Mumbai. On the one hand, now there is a fierce competition among political parties to loot the credit for installing Marathi signboards in big letters on all small and big shops in Maharashtra. While this has scared the traders and is worried about the safety of themselves and their shop, at the moment there is an atmosphere of concern everywhere. Significantly, on Wednesday, the Uddhav cabinet had taken a decision to make large signboards of shops mandatory in Marathi.

On this issue, MNS leader Sandeep Deshpande said in a threatening tone, “The shopkeepers should think carefully whether the cost of changing the signboard will be more or the cost of changing the glass of the shop will be more.” Viren Shah, president of Federation of Retail Traders and Welfare Associations, said, “We do not mind writing in Marathi on the boards of our shops, but we do have a slight objection to the font size.” Along with this, now he has also requested the Uddhav government not to put pressure on the shopkeepers in this regard and has also demanded the security of his shop. After this, police were also deployed around his shop.

the government itself bears the expenses

At the same time, AIMIM MP Imtiaz Jaleel has demanded from the Thackeray government that the shopkeepers are in bad condition due to the lockdown. Their living is difficult. In such a situation, from where will they get the money to change the signboard of the shop? The cost of changing the signboard should be borne by the Uddhav government.

On this issue, Shiv Sena MP Sanjay Raut hit back saying, “You live in Maharashtra, do business here and oppose Marathi only. This will never be tolerated. MP Jalil should at least not speak such language.”

Tattva Chintan Pharma’s 500 crore IPO will open on July 16, this price band has been fixed for subscription

Film in 1 rupee, first brand endorsement in 84 years, do you know how much property was owned by Milkha Singh