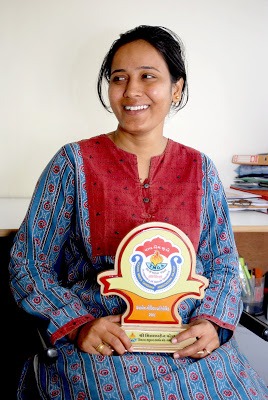 Even today, there are many such nomadic tribes in our country who should try to connect with the mainstream of society and this is our responsibility as well. There are crores of people in our country even today, who do not have any identity of their own, we just know them by their work, like someone who is sharpening a knife, someone walking on a rope, these people do not have the common facilities which That other citizens of India are available because those innocent people lack information. Raised her voice for the upliftment of those Banjars, hailing from Ahmedabad, Gujarat Mittal Patel has.

Mittal was preparing for the civil service examination as a journalist. But today, she is not only getting the rights of the nomadic community but she is uniting them day and night to bring them into the mainstream of the society. Let me tell you that when Mittal Patel was studying journalism, she got a chance to meet such people during that time. At that time, Mittal discovered that Gujarat alone contained 28 nomadic tribes in government documents and 12 of them were tribes that were not even recorded in any official paper because they had no identity of their own due to being a nomad.

Neither did they have voter card, ration card, pan card, passport proof. And at the same time, these people do not do any such work which can be done for more days than staying in one place. They did not have a single place. These people, who lived a nomadic life, were unaware of the changing environment.

When Mittal Patel saw all this, she thought that it was necessary to share this information with the government and voluntary organizations working for the nomadic people so that they could overcome their problems, but knowing them closely, their problems Going to know, she decided that why not work in this field on her own.

Turning her decision into action, Mittal established a “Wisdom Community Support Forum”. her organization met the then Chief Election Commissioner of Gujarat in 2007 to address the problems of nomadic people and managed to convince them that how much Voter ID cards are necessary for those Banjaras. After her efforts, the Commission agreed to make voter ID cards of those people. The hard work of Mittal’s organization paid off and for the first time, voter ID cards of more than 20 thousand nomadic tribes were made.

Mittal Patel states that “Most people do not know how to work with these nomadic people, but we understood that the nomadic people may travel anywhere throughout the year but do not travel during the monsoon.” They stay in such a village every year where they get the most love and belonging. We also put this matter before the Election Commissioner and told the Commission that where these people stay every year during the monsoon season, they should take their permanent address. In this way, those people also became entitled to all the facilities provided to that village. “

Due to their efforts, not only the voters’ cards of those people but also started getting the benefits of ration cards and other government facilities. Today, Mittal Patel has helped in making voter cards of more than 72 thousand people. Some time ago, through a camp, she has made voter cards of 500 nomadic people. But Mittal’s work was not just completed by making a voter card or ration card, it was just the beginning of work.

Through her organization “Vicharta Community Support Forum”, she ran tent schools in a place where a large number of nomadic people lived. As of today, her organization is running tent schools in 13 places in Gujarat. Due to her efforts, primary education is reaching children of 19 tribes out of 40 nomadic tribes in Gujarat today. Where classes are being taught from first-class to tenth.

When Mittal was asked that when the nomadic people do not live in one place, how will their children study in one place? In response to this question, Mittal Patel said, “We saw that the people of the Banjara community wanted to teach their children but they could not even leave work, so they had to go to far-flung areas. To deal with this problem, we opened 4 hostels in Saurashtra, Ahmedabad and Rajanpur. Where today seven hundred children are studying. In such a situation, even though their parents may go to work for months, but their children can study in one place. ”

On the other hand, Mittal Patel and her team saw that the most prominent employment crisis has arisen for these nomadic castes. Due to this, a lot of people of the Banjara community had to start begging. Keeping this in mind, these people have also started the job of giving them vocational training. And so far, about three hundred people have taken vocational training.

Now the people of the Banjara community have started taking loans from opening tea shops, selling vegetable shops, bangles and bindi, or even buying a camel cart so that they can take others from one place to another. Can do.

Mittal Patel states that “People have welcomed new employment opportunities only then from March 2014 till now these people of 430 Banjara community can start their employment by taking advantage of government facilities.”

Petrol-Diesel Price Today October 1: Starting of the month due to the oil hit, petrol became expensive for the second consecutive day, check the...

Indian laborers spend the life of ‘slaves’ in Italy, neither leave, nor rest, if they complain, they get death threats

The price of our ‘one rupee’ is very high in these countries, you can enjoy long holidays with less money