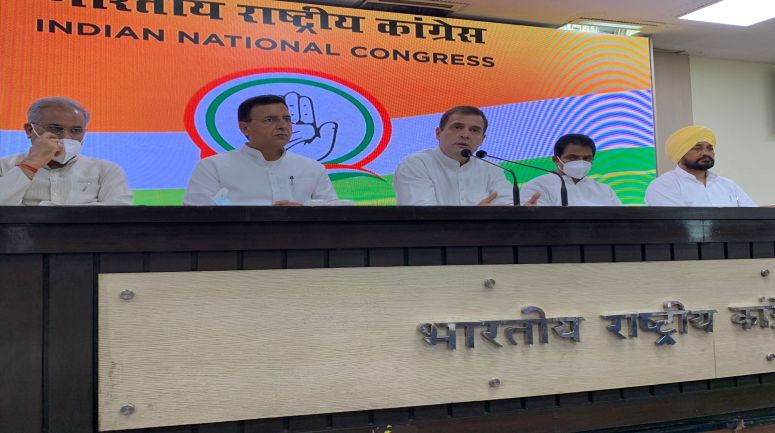 Former Congress President Rahul Gandhi has announced to visit Lakhimpur Kheri today (Wednesday), but it has not been allowed by the Uttar Pradesh government. The Congress had sought permission from the UP government for the five-member delegation led by Rahul to go to Lakhimpur, which was rejected by the Yogi government. However, even after not getting permission from the government, Rahul Gandhi said that today we will go to Lakhimpur Kheri with 2 Chief Ministers and try to meet those families.

In view of Rahul Gandhi, the administration is on alert from Lucknow to Lakhimpur Kheri. Section-144 is applicable in Lucknow and Lakhimpur. Meanwhile, internet has been snapped in Sitapur, where Congress leader Priyanka Gandhi Vadra has been detained for trying to reach Lakhimpur. Internet services were also reportedly suspended in Bahraich for a few hours this morning when the last rites of the deceased farmer were being performed. However, it was soon restored.

He said that the SP and DM of Sitapur have informed us in writing that Priyanka Gandhi is there. The law and order situation may worsen due to the arrival of Rahul Gandhi, Congress workers, leaders. He has also urged that Rahul Gandhi should not be allowed to come to Sitapur under any circumstances.

Still, if he (Rahul Gandhi) comes to Lucknow, we will meet him at the airport and request him not to go to Sitapur or Lakhimpur Kheri, the official said. Meanwhile, in a press conference on Wednesday, Rahul Gandhi said that he will visit Lakhimpur Kheri along with Chhattisgarh Chief Minister Bhupesh Baghel and Punjab Chief Minister Charanjit Channi.

Rahul Gandhi said that the farmers of the country are being attacked by the government for some time. Farmers are being crushed under the jeep. He is being murdered. No action is being taken against the son of a BJP minister. He said that the Indian government is attacking the farmers. He said that Section 144 is applicable in Lakhimpur Kheri, it stops only 5 people, we 3 people are going. We have written them a letter. The job of the opposition is to create pressure so that action is taken.

Party’s national general secretary Priyanka Gandhi Vadra has already been detained in Sitapur along with 10 party leaders. Priyanka Gandhi was detained in the early hours of Monday when she was on her way to Lakhimpur Kheri. The Congress has alleged that Priyanka is not being allowed to meet her lawyers and the administration is not giving reasons for her detention.

Government insurance company LIC will sell 100% stake in this bank, management control will also be transferred

Do you also want to buy Samsung smartphones? This news can disappoint

PAK: Blood-soaked policeman narrates the incident, how the fundamentalists ran and held hostage