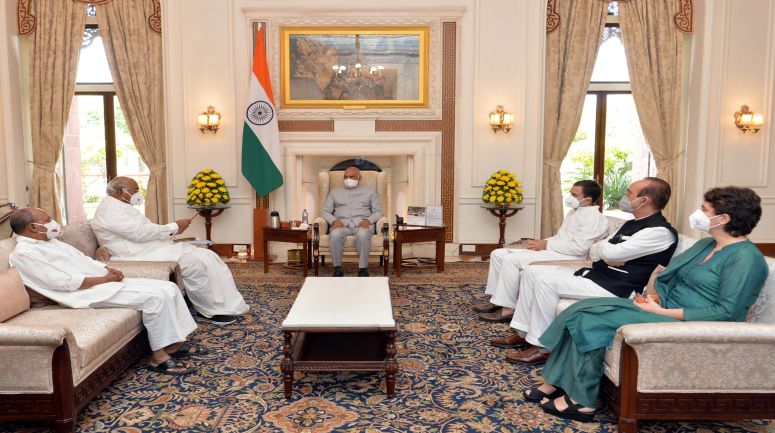 A high-level delegation of the party, led by former Congress President Rahul Gandhi, met President Ram Nath Kovind on Wednesday over the Lakhimpur Kheri violence case. During this, Congress leaders urged the President to sack Ajay Kumar Mishra Teni from the post of Union Minister of State for Home so that a fair investigation can be conducted and justice to the families of the victims. The party delegation also submitted a memorandum to the President in this regard.

The party also said that a commission of two sitting judges of the Supreme Court or High Court should be constituted to investigate the matter and the President should direct the government in this regard. Apart from Rahul Gandhi, the Congress delegation included Leader of Opposition in Rajya Sabha Mallikarjun Kharge, senior leaders AK Antony, Ghulam Nabi Azad and party general secretary Priyanka Gandhi Vadra.

After meeting the President, Rahul Gandhi told reporters that the families whose members were crushed told that they want justice. They want that the person who committed this murder should be punished. He has also said that the father of the person who committed the murder is the Minister of State for Home of the country and as long as that person is a Minister, there can be no proper investigation.

He told that we have told these things to the President and we told him that this is not just the voice of these families, but the voice of every farmer. Referring to a statement of Mishra, the Congress leader said that this person had said before the murder that if you do not improve, then I will reform, had threatened the farmers. We told the President that as long as this person is a minister, then farmers cannot get justice. Therefore, it should be probed through the two sitting judges of the Supreme Court.

At the same time, during this, Priyanka Gandhi said that the families of martyr farmers and journalist Ramesh Kashyap want justice. The inquiry should be done through the present judges. He believes that without the dismissal of the minister, there cannot be a proper inquiry. This is not just the demand of the martyr farmers, but the demand of all the people of Uttar Pradesh and every person with right thinking.

Let us tell you that eight people, including four farmers, were killed in the violence that broke out in Tikunia area of ​​Lakhimpur Kheri district on October 3, against UP Deputy Chief Minister Keshav Prasad Maurya’s visit to the native village of Union Minister of State for Home Ajay Mishra. Was. A case has been registered against many people including Mishra’s son Ashish in this case. Ashish Mishra was arrested on Saturday.

IPO 2021: Aadhaar Housing Finance to bring Rs 7300 crore IPO! What is the plan of the company

Mrs Bectors Food IPO: Did you get the share of ‘Superhit IPO’ Mr Bectors Food? Check like this