Lakhimpur Violence: Government will give Rs 45-45 lakh to the families of the farmers who died, retired HC judges will investigate 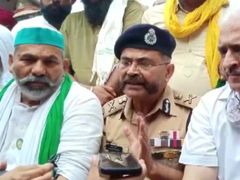 After the death of farmers in Lakhimpur Kheri violence, an agreement has been reached between the officials of the Uttar Pradesh government and the farmers and all their demands have been accepted. Additional Chief Secretary (Home) Avneesh Awasthi told PTI on Monday that under the agreement between the farmers, financial assistance of Rs 45-45 lakh would be given to the four farmer families killed in Lakhimpur. Apart from this, one member of the family will also be given a government job at the local level.

He further said, while the injured would be given financial assistance of Rs 10 lakh each for better treatment. On the demand of the farmers, the judicial inquiry of the matter will be done by a retired judge of the High Court. He said that on the demand of the farmers, an effective inquiry into the entire matter would be conducted at the earliest.

At the same time, ADG (Law and Order), UP, Prashant Kumar also gave this information in a press conference with farmer leader Rakesh Tikait in Lakhimpur. The ADG said, “No guilty person will be spared, arrest will be made very soon. FIR has been registered on Tahrir under different relevant sections.”

Leaders of political parties cannot come to the district

ADG Kumar further said, “Leaders of political parties are not allowed to visit the district due to imposition of Section 144 of CrPC. However, members of farmer unions are allowed here.”

Prashant Kumar said that the government will give Rs 45 lakh and a government job to the families of 4 farmers killed in Lakhimpur Kheri yesterday. 10 lakh will be given to the injured. An FIR will be registered based on the complaint of the farmers. A retired judge of the High Court will investigate the matter.

Eight people, including four farmers, were killed in violence that erupted on Sunday against Uttar Pradesh Deputy Chief Minister Keshav Prasad Maurya’s protest against attending a program being organized in the native village of Union Minister of State for Home Ajay Mishra.

It is alleged that Mishra’s son Ashish overpowered the farmers, which led to his death. A case has been registered against many people including Ashish in this case.

At the same time, Union Minister of State for Home Ajay Mishra Teni said in his clarification that it is clear in the video that some people are killing and they are also saying that you take the name of the minister. My car was carrying the workers, they may have understood that my son is in it after seeing it. It could also be an attack to kill him.

Teni further said, “I demand that Rs 50 lakh should be given to the families of every single BJP worker killed yesterday. The matter should be investigated either under the supervision of CBI, SIT or a sitting/retired judge and the culprits should be punished. Strict action should be taken against him.”

Why did websites like Zomato, Google Meet, Microsoft and Paytm stalled? Outage problem due to this

Women’s Day 2021: Women like to pay in cash, Aadhaar on the second number