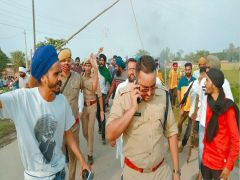 Lakhimpur Kheri Violence Updates: Violence erupted after two vehicles allegedly ran over the Centre’s agricultural law opponents protesting against the visit of UP Deputy CM Keshav Prasad Maurya on Tikonia-Banbirpur road in Lakhimpur Kheri, Uttar Pradesh on Sunday. Went. According to media reports, a total of 8 people, including 4 farmers, have died in the farmers’ agitation. BJP claims that 3 of its workers have also died during the violence.

Eight people, including four farmers, were killed in Lakhimpur Kheri district on Sunday when violence erupted against UP Deputy Chief Minister Keshav Prasad Maurya’s visit to Banbirpur village, a senior police officer at the police headquarters in Lucknow told Hindustan Times. Violence and arson broke out after eight people were feared dead when a jeep allegedly rammed a protesting farmers into Lakhimpur Kheri on Sunday afternoon, police officials said.

Bharatiya Kisan Union (BKU) leader Rakesh Tikait claimed in a tweet that farmers returning after protesting against the Centre’s new agricultural laws were attacked. He also alleged that people in the convoy opened fire. Tikait said that he is going to Lakhimpur Kheri and is likely to reach by midnight. Meanwhile, Deputy Chief Minister Maurya’s visit to Banbirpur village has been canceled in view of the violence.

Taking a serious note of the incident, Prashant Kumar, Additional Director General (ADG) (Law and Order) of UP Police, along with other senior officers, has reached the spot to control the situation. Tikonia is about 70 kms from Lakhimpur Kheri district headquarter and very close to Indo-Nepal border. A local police official said the violence took place minutes before Keshav Prasad Maurya’s visit to Banbirpur village under Tikonia police station area.

Rakesh Tickett said in a tweet that Ajay Teni and his son Monu Teni, convicted in the Lakhimpurkhiri massacre, are guilty of 8 murders, the Union Minister of State involved in the conspiracy should be immediately sacked and arrested along with the son and sent to jail. He said that the government should come to its senses and register a murder case against the killers of farmers and ensure their arrest. There is an appeal to the farmers to maintain peace, the victory will be of the farmers.

Farmers’ organizations allege that the vehicles involved in a convoy of a BJP leader were thrown at the farmers. The Bharatiya Kisan Union tweeted and claimed that the agitating farmers in Lakhimpur Kheri were trampled by the son of Minister of State for Home, Teni. Angry protesters allegedly forcibly stopped two vehicles and set them on fire. The farmers were protesting Maurya’s visit to Banbirpur, which is the native village of Union Minister of State for Home and Kheri MP Ajay Mishra Teni.

Opposition parties Congress, Samajwadi Party, Rashtriya Lok Dal and Bharatiya Kisan Union have reacted sharply to this incident and have blamed the BJP and the son of Minister of State for Home Ajay Mishra for the incident. Sharing the news of the incident, former Congress President Rahul Gandhi tweeted and wrote, who is silent even after seeing this inhuman massacre, he is already dead. But we will not let this sacrifice go in vain – Kisan Satyagraha Zindabad!

Samajwadi Party President and former UP Chief Minister Akhilesh Yadav tweeted that it is a very inhuman cruel act to trample the farmers peacefully protesting against the agricultural laws by the son of the Minister of State for Home of the BJP government. Rashtriya Lok Dal President Jayant Choudhary tweeted, “Shocking news coming from Lakhimpur Kheri. Union Minister of State for Home Ajay Mishra’s convoy was mounted on the agitating farmers. Two farmers were killed and many injured.

Chaudhary has further written that who has done the black act of suppressing the protest, when the Home Minister is hatching a conspiracy, then who is safe. Samajwadi Party leader Akhilesh Yadav demanded the resignation of the Chief Minister in a tweet regarding the incident. He said that in Lakhimpuri Khiri, a few talks could be held with the farmer leader Tejinder Singh Virk ji, who was seriously injured in the incident of being trampled by BJPmen, in view of his very serious condition, the government should provide him the best treatment. Akhilesh further wrote that just one demand, the Chief Minister should resign.

Congress General Secretary Priyanka Gandhi Vadra tweeted and wrote that how much does the BJP hate the farmers of the country? Don’t they have a right to live? If they raise their voice, will you shoot them, trample on the car? Enough. This is a country of farmers, not a fiefdom of BJP’s brutal ideology. Kisan Satyagraha will be strengthened and the voice of the farmer will be louder. Priyanka Gandhi will also visit the spot on Monday.

COVID or not? You can get information in minutes by sending X-ray report to this number, this service is of great use