Know why licenses of 50 traders were suspended in Chandvad 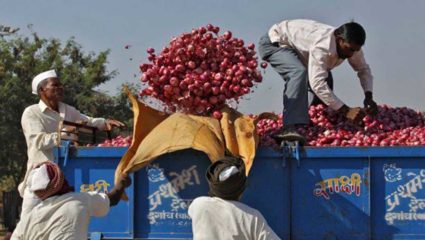 Chandwad: In the dispute of new and old traders, the construction problem regarding the auction of onions in the Agricultural Produce Market Committee, which has been stalled for the last three days, has been successful in solving the problem. After this, the auction of onions started undone from Friday. Onion growers who had been waiting for the auction for three days got relief. Due to the sudden closure of the auction, the farmers who arrived for the sale of onions had to face many problems, keeping in mind that the Board of Directors of the Mandi Committee suspended the licenses of about 50 traders who came out of the auction for three days.

Chairman Dr. Atmaram Kumbharde informed that 50 to 60 old and new 20 to 25 traders will collectively participate in the auction of onion from Monday after the dispute between old and new traders is over. On behalf of the market committee, 20 to 25 new traders have been given license to buy onions. For whom the market committee is positive to participate in the auction, but the old traders are opposing it. have separated. This stalled the auction of onions.

Hundreds of farmers had reached the market committee with onions through vehicles, but they had to face many problems due to the stalled auction. New traders only auctioned onions brought from rickshaw, pickup vehicles. This resulted in a drop in onion prices. Due to this the farmers expressed their indignation by protesting. The Mandi administration took seriously the dispute between the old and new traders. Directors including Chairman Dr. Atmaram Kumbharde intervened. Businessmen’s meeting was called. The dispute between the old and the new traders was resolved. After this, the auction started undone from Friday. In the meantime, getting angry with this attitude of the traders, the committee gave information about suspending the licenses of about 50 traders who came out of the auction for 3 days.

India’s MSME sector is getting free from old thinking, digital is becoming a new weapon

Lockdown is going to happen in Mumbai! Mayor had given a warning, know what will remain open and closed