Know where is the mega block on Central Railway on Sunday 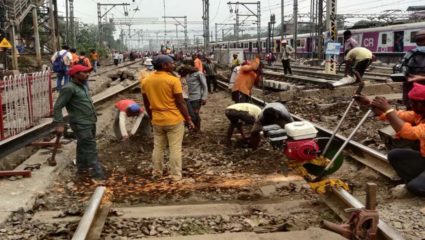 Mumbai: There will be a mega block on Sunday for repair work in the suburban sections of Central Railway. Down fast services leaving CSMT from 10.25 am to 3.44 pm will be diverted to Down slow line at Matunga, stopping at stations between Matunga and Mulund as per their respective halts.

Special services will run between Panvel and Kurla

To carry out maintenance work of tracks, signaling and overhead equipment, a Jumbo Block will be taken on UP and DOWN FAST lines between Santacruz and Goregaon stations on Sunday, 16th January, 2022.@drmbct @RailMinIndia pic.twitter.com/8vpYsHRxfu

Meanwhile, a five-hour jumbo block will be taken on Up and Down fast lines from 10 am to 3 pm on Sunday between Santacruz and Goregaon stations of Western Railway for maintenance of tracks, signaling and overhead equipment. The suburban services between Santacruz and Goregaon stations will be operated on slow lines during the block period. Some suburban trains will remain canceled during the block.

11 new cases of Omicron were reported in Tamil Nadu, the number of infected increased to 45

Know which player gave 14 percent return in just 2 days in the earning game of the stock market, attractive returns of other players...

Income Tax Return filing: Keep in mind while filing returns, this time there have been major changes in the form.