Kharegaon railway gate of death will be closed from today, will be inaugurated by foster minister Eknath Shinde 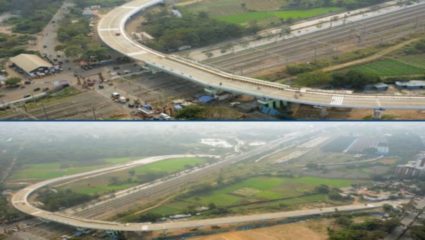 Thane: The citizens of Kalwa East and West of Thane had to face many problems to go from east to west and from west to east, as the gate was the only way. Keeping in mind the problem of the public, the work of a new bridge at the site of the gate itself was started by the Central Railway and the Thane Municipal Corporation. The bridge work is now complete. Which will be inaugurated today by Urban Development Minister and Thane District Guardian Minister Eknath Shinde. After this inauguration, the Kharegaon gate, which is considered the gate of death, will be completely closed.

It is worth mentioning that the Kharegaon gate was used to go from Kalwa East to West and Kalwa West to Kalwa East. Many civilians even lost their lives in accidents that happened while crossing the gate. To solve this problem of Kalwa residents, the work of new bridge at the same place of Kharegaon gate was started by Central Railway and Thane Municipal Corporation. The work of the bridge has now been completed which will be inaugurated by Urban Development Minister Eknath Shinde. Thane Municipal Corporation Additional Municipal Engineer Arjun Ahire said that a total of Rs 23 crore 34 lakh 8 thousand has been spent on this 703 meter bridge. The bridge work has been completed.

There was a word war between NCP and Shiv Sena.

At the same time, the ruling Shiv Sena and the opposition NCP had seen a verbal war over the construction of this bridge. Along with this, a cold war was going on between the two regarding the inauguration of the bridge. Because Shiv Sena was claiming that the work on this bridge has started because of him, and the credit for its construction goes to local MP Shrikant Shinde. On the other hand, MLA Jitendra Awhad has claimed that the bridge will be inaugurated by NCP State President Jayant Patil as NCP had first demanded the construction of this bridge and then MP Anand Paranjpe by correspondence through the Railways. But now the ruling Shiv Sena has won and is about to be inaugurated by Shiv Sena leader Eknath Shinde.

Inflation rate: Petrol, edible oil and petrol fueled the fire of inflation, now it will remain uncontrollable throughout the year

Who will be the chief ministerial face of AAP in Punjab? Arvind Kejriwal sought public opinion by releasing mobile number

Tesla cars launched in these two countries before India, will have to wait for here