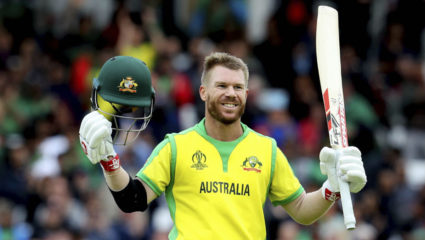 It is worth noting that before the T20 World Cup, David Warner was going through a phase of poor form. The last season of IPL, IPL 2021, the Mahakumbh of league cricket, was very disappointing for David Warner. Not only this, the captaincy of Sunrisers Hyderabad was also taken away from him. And, there was a time when he was dropped from the playing XI as well.

But, this blazing explosive batsman of Australia did not let the frustration pass and was able to overcome the disappointment that was being challenged from the front. Hausaal supported and he recovered his lost form and showed his batting prowess in the T20 World Cup that he was awarded the ‘Player of the Tournament’.

It is worth noting that apart from David Warner, Pakistan’s Abid Ali and New Zealand’s deadly bowler Tim Southee were also involved in the race for the Player of the Month title. But, Australia’s swashbuckling batsman David Warner got more votes than the other two players. And, Warner was named ‘ICC Player of the Month’.

The history of ICC T20 World Cup shows that David Warner scored 289 runs in 7 matches played in T20 WC 2021. He also included 3 scintillating half-centuries. In this recent World Cup, David Warner had the best of 49 runs against Pakistan in the semi-final match. And, in the T20 World Cup, 2021 Final match, he scored a half-century against New Zealand (New Zealand vs Australia T20 World Cup Final, 2021) and played an important role in making his team the world champion.

Australia’s swashbuckling batsman David Warner, who is going through a tour of very poor form during the IPL, has surprised all the critics by making a tremendous comeback.

Airtel joins hands with Intel for 5G services, this will be a new strategy for technology

PV Sindhu’s brilliant performance, made it to the semi-finals of India Open