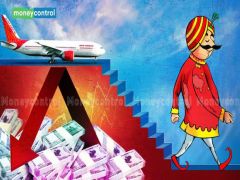 The keys to Air India will go to the Tata Group in December. However, valuation experts say that by then it would have cost the government about Rs 1,57,339 crore in the last 10 years. Obviously, this money will go from the pockets of the taxpayers.

The valuation expert has made this estimate by looking at the expenditure on the airline since December 2009-10. The assessment includes all aspects such as debt owed to Air India, payments to vendors, cash received from Tatas to the government, assets left with the government of Air India after the sale, etc.

Hurun Rich List 2021: These are India’s richest self-made businessmen under the age of 40

Tata Group has won Air India by bidding for Rs 18,000 crore. Under this, the Tata group will have 100% stake in Air India and its subsidiary Air India Express, while it will have 50% stake in the Air India SATS joint venture.

After the transfer of ownership of Air India to the Tata Group, the government will be left with some of its non-core assets and debt of Rs 46,262 crore. This loan will be transferred to Air India Asset Holding Limited (AIAHL), a special purpose vehicle formed by the government.

In addition to the stake in Air India’s subsidiary, AIAHL has also been created to acquire Air India’s assets. This includes Air India’s paintings, aircrafts and other non-operational assets, non-core assets, movable and immovable properties, working capital loans without pledge of any assets and other assets and liabilities to AIAHL.

According to valuation experts, after subtracting the estimated amount to be received by the government from these assets, the cost of the airline would come to Indian taxpayers at around Rs 1,57,339 crore. However, with this, experts also say that it will be difficult for the government to sell off the subsidiaries of Air India as it may need these subsidiaries and assets to keep Alliance Air’s operations going.

Rakesh Jhunjhunwala sold his stake in this pharma company, making a loss deal

An aviation expert at Morgan Stanley told Moneycontrol, “The government will need to keep AIATSL, AIESL and Alliance Air operational as they provide services under the UDAN scheme (UDAN scheme) to regional routes and smaller markets, where private companies are involved. They usually don’t show interest due to low profits.

The UDAN scheme reflects the theme of ‘Ude Desh ka Aam Nagrik’, which is the government’s regional airport development programme. Experts said that the valuation of Air India’s subsidiaries could be around Rs 1,000 crore. He said that private companies hardly show interest in smaller and less profitable markets. In such a situation, it will be difficult for the government to find potential buyers of these companies.

Tomorrow there will be a big announcement regarding PLI in the telecom sector, know who will get how much

Government’s expenditure on Air India in the last 10 years

Air pollution: Delhi will get green fund of Rs 18 crore for the first time under NCAP program

Realme GT Neo 2 will be launched in India on October 13, know what will be the features and price