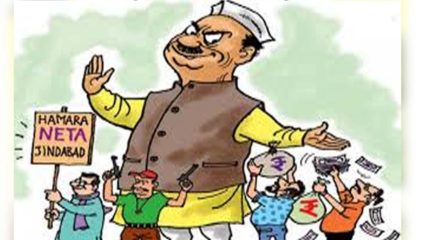 Uttar Pradesh Election Watch and Association for Democratic Reform (ADR) have analyzed the affidavits of 670 candidates out of 676 contesting in the sixth phase of the Uttar Pradesh Assembly elections. In this phase, elections are to be held for 57 assembly seats.

In the first place in the criminal cases declared by the candidates in the sixth phase, the Bahujan Samaj Party candidate from Sahjanwa assembly seat of Gorakhpur, Sudhir Singh, has 26 cases registered against him. In the second place is Ashok Chauhan of Suheldev Bharatiya Samaj Party from Khadda assembly seat of Kushinagar district, who has 19 cases and in third place is Chandra Shekhar from Gorakhpur assembly constituency of Azad Samaj Party who has 16 cases registered. In the sixth phase, two candidates have been booked for rape and eight for murder.

Even in the case of crorepati candidates, the sixth phase is not lagging behind the rest. A total of 38 per cent candidates are crorepatis in this phase. In Samajwadi Party, 94 per cent BJP has given tickets to 81 per cent crorepatis. At the same time, 77 percent of BSP candidates and 46 percent of Congress candidates are crorepatis. Among the top 3 candidates who declared the most assets, in the first place is SP’s candidate Vinay Shankar from Gorakhpur’s Chillupar assembly, who has declared his assets as Rs 67 crore, and in the second place is Rakesh Pandey from Jalalpur of Ambedkar Nagar, whose assets are 63. crore is Rs. In third place is Uma Shankar Singh from Rasad assembly seat of Bahujan Samaj Party’s Ballia district, who has declared his assets as 54 crores.

The presence of money-bearers and bahubalis is becoming an important part of electoral politics. The percentage of bahubali and money power among the election candidates is increasing continuously which is a matter of concern.

Life of employees will change, work will be done for 4 days in a week, salary will change

Four new labor laws can be implemented in the next financial year 2022.New Delhi, Four…

In just 18 months, Koo made a great record, rapidly crossed the figure of 10 million users

After winning the Atmanirbhar App Innovation Challenge in 2020 organized by the Government of India,…