In Pimpri-Chinchwad, the case of giving fake bank guarantee in the contract for cleaning the roads has been exposed. 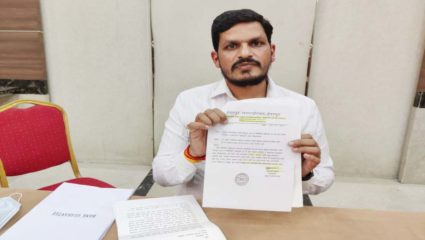 Pimpri: BJP corporator Tushar Kathe has made a shocking disclosure in a press conference on Thursday after bringing to the fore a scam of Rs 55 crore in the contracts for cleaning the roads. The Pimpri-Chinchwad Municipal Corporation has submitted a fake bank guarantee by the concerned company after producing forged documents to secure the road cleaning contract. The bank guarantee documents which have been attached by this company to the extent of 8 crores, have been given in writing by the same bank itself as being fake.

Corporator Kamthe had earlier exposed the allegations of corruption worth Rs 55 crore in the contract of cleaning the roads of A and B regional office areas in the general meeting of the Municipal Corporation. The concerned Secure IT Facility Company had attached the experience certificates of Indapur Municipal Council and Tuljapur, District Osmanabad to get this contract, which have been found to be fake. Kamthe told the House that experience certificates and fake letterheads were submitted with forged signatures of the chief officers of both the municipal councils. What does the Vigilance Committee of the Municipal Corporation investigate? Kamthe had also raised this question. However, no concrete action has been taken by the municipal administration so far.

Meanwhile, the bank guarantees furnished by the Secure IT Facility Management Company to secure the said contract have come to the fore. State Bank of India’s Mumbai Fort branch manager Ulaganathan V has given such a written letter to corporator Kamthe. BG numbers SBILG00004731679020 and SBILG00004731679019 both are fake bank guarantees and no such bank guarantee has been issued by the bank administration, it has been disclosed in writing. Therefore, it has become clear that the Secure IT Facility Management Company has committed a major fraud on the part of the Municipal Administration. Earlier, the evidence of forged work orders of Indapur Municipal Council, Tuljapur Municipal Council was presented in the general meeting of the Municipal Corporation in front of all the members of the Municipal Council by forged signatures. Since then it has been proved that the concerned Secure IT Facility Management Company has deliberately defrauded the administration by presenting forged bank guarantees. Councilor Tushar Kamthe has also demanded that Corporation Commissioner Rajesh Patil should take legal action and register a criminal case against those who cheated the corporation.

Without the blessings of a politician, no company can do so much wrong in the tender process done with the tax money of common man. The administration is not taking action even after presenting the evidence of this fraud, it is a fraud with Pimpri-Chinchwadkar. Earlier, a written complaint was lodged with Deputy Chief Minister Ajit Pawar. Councilor Kamthe said that we will present evidence regarding forged documents, forged signatures and now forged bank guarantees submitted by the concerned organization to the Police Commissioner Krishnaprakash and will register a criminal case against the persons concerned. I repeatedly asked the administration about the EMD deposited by the Secure IT company, but I deliberately avoided giving. Because it is my clear allegation that the concerned EMD has been deposited from the bank account of a former mayor. I have sought information about the concerned EMD in NIC in Mumbai. I will get it soon and the former mayor’s name will be revealed soon.

The bank will also file a case

What is Ashwagandha & its Benefits and Use?