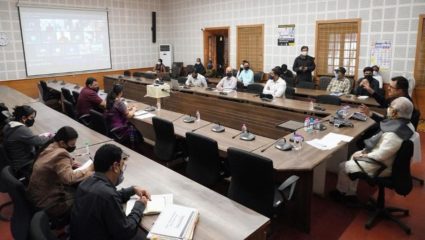 Nashik: In view of the rapidly increasing number of corona patients in Nashik, the administration’s heartbeat has increased. Guardian Minister Chhagan Bhujbal has held a Corona review meeting in the District Magistrate Auditorium regarding this. During this, he has given instructions to the Police Commissioner to curb the crowding in Ramkund, Panchavati part of the city. Along with this, a ban on open tourism has also been ordered. He has indicated that soon a decision will be taken on religious places.

Nashik is also famous for tourism. Citizens from all over the country come to Nashik for many religious rituals. Because of this there is crowd in Ramkund and Godavari complex. Many types of religious rituals continue on the banks of the river. But due to the rapid increase in the number of corona patients, the earlier opened tourist places have been ordered to be closed. Along with this, now the limit of how many people can be present in religious rituals at these places will be fixed. The Guardian Minister has given instructions to reduce the crowd at all the tourist places of the city.

Guardian Minister Chhagan Bhujbal said that the third wave has mild symptoms. Due to this the period of isolation has been reduced. The increasing number of patients is a matter of concern, yet good measures are being taken through the system in Nashik district at the state level. Similarly, open tourism and religious places should not be crowded and make a plan to strictly follow the corona rules. The guidelines issued by the state government should be fully followed during the Corona period.

Bond Yield, from GDP to Air Strike; These 5 reasons caused a major drop in the stock market in 2021

Financial security of family is not retirement planning is the first priority of the people, now Indians are spending more than savings

International Monetary Fund Report: India will come down from Bangladesh in this case!