He had nothing but a job of 10 thousand and a fax-machine, today he owns a company of 500 crores. 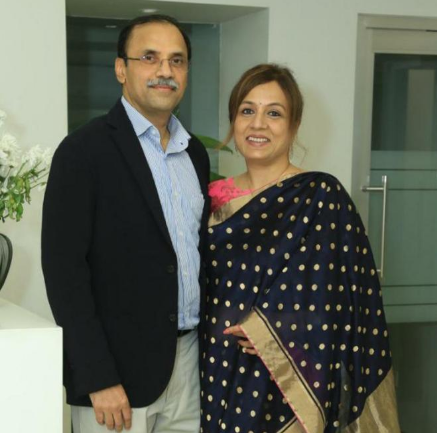 After the independence of India in 1947, the society has displayed rapid changes in the way of life. Today, even when the younger generation is leading the change and moving towards making life with their foresight very easy, the struggles that the common man fought in the 70s, 80s and 90s can never be forgotten. .

The problems that existed for decades after India’s independence were quite different from the struggles of modern times. It was not easy to complete education in a poverty-stricken family and there were many challenges in getting a job after studies. Many changes are taking place in the socio-economics of India, leading to the rise and fall of many companies and consequent loss of jobs. Our story today is of a man who, in the 90s, built a magnificent empire of success, facing all these challenges.

56 years old Ravindra Jagtap Was born in a typical middle-class family in Pune. An engineering degree was the only hope for Ravindra, one of the four children of his parents – he completed his engineering studies amidst great difficulties. Now the biggest challenge before him was to get a job.

After finding a job for a few years, Ravindra joined a company called Metachem and married the following year. Life was constantly moving forward, but somewhere inside Ravindra, an entrepreneurial fire was burning. It was unimaginable to establish his own company with a young man from a middle-class family – both financially and psychologically. While traveling to and from office, Ravindra often saw Aditya Birla (owner of the Birla Group) in a grand car at Signal. He was so fascinated with a business career that he even named his newborn son ‘Aditya’. In that circumstance it was enough to appease his entrepreneurial ambitions.

Suddenly the owner of Ravindra’s company died in the year 1995. The new management decided to take the company in a new direction. Ravindra quit his post due to the death of his mentor and rapid change in the company. A modest salary of Rs 5000-10000 never allowed him to save anything for the future in a city like Mumbai. That was the most important time in Ravindra’s life. The search for new employment and family care was a heavy burden, but he was hopeful. It was Ravindra’s hope that convinced him to consider self-employment. But, the biggest challenge was to start without any working capital. Ravindra had to do something new. After preliminary research, he decided that he would do business related to ingredients used in the pharma sector.

Business Khabar In an exclusive interview with Ravindra, he said that to start with, all I had was a fax-machine that I used to work with while working with my previous company. That simple fax-machine inspired me to reach potential customers, which later changed my fate.

Ravindra laid the foundation of his dream under the banner of Astrid International. It was 1997, when the company deals only one product ‘Metformin HCL’. Ravindra did research on API products, which could be exported to other countries. Also, he continued to visit libraries to locate national suppliers and international customers with the help of trade directories. This was the pre-email era and postal mail was the only means of contact at that time. One had to wait for two months to receive a reply through postal mail. Even after a long wait, he did not get an answer from any international company. Ravindra did not give up and continued to work, finding customers from small to large. The activity started for survival in the year 1997 already generated a turnover of Rs 20 lakhs.

Today, the Astrid Group has an annual turnover of Rs 150 crore and a valuation of over Rs 500 crore. However his trading wing is still operational. The company has its own manufacturing unit in the Malad area of ​​Maharashtra. The company’s research wing is constantly researching new products. Astrid has been exporting to more than 50 countries worldwide – having its own offices in India, China and Dubai. The company has also started work on a new greenfield manufacturing facility with the intention of bringing environmental sustainability. This new unit is being built at a cost of Rs 50 crore.

Today Ravindra Jagtap Pharma is known as a respected person in the industry. His company works with almost all the big pharma companies in India and globally. Honoring his work in the pharma sector, the company has also been awarded the ‘Make in India’ incentive award by the Government of India for its work in import options. Ravindra’s inspiring story is a living example of how an ordinary man can achieve extraordinary achievements with strong will and never-give-up spirit.

‘Map of the universe’ found in Turkey, this 3200-year-old document revealed the ‘underworld’ present under the earth

Country’s largest private bank HDFC fined lakhs, you will be surprised to know the reason