Godavari Express did not run till Hingoli, people of Nashik protested 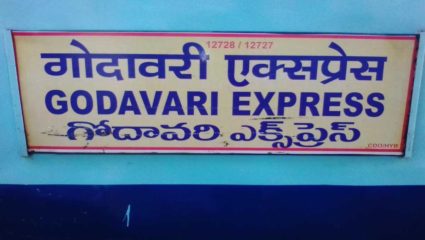 Nashik Road: For the convenience of transporting the citizens of Hingoli to Mumbai, the demand for taking Manmad-Mumbai Godavari Express to Hingoli has been made by Hingoli MP Hemant Patil. Who has written a letter to the Minister of State for Railways, Raosaheb Danve. Nashik residents have opposed this demand of MP Patil.

At present Godavari Express (Train No. 12117 and 12118) is closed for two years due to Corona epidemic, which is being demanded by the residents of Nashik to start immediately, but the Railway Department is ignoring it. Godavari Express leaving Manmad is convenient for the citizens of Nashik district to go to Mumbai, the citizens of Nashik are demanding to keep the time and take the train till Hingoli. Hingoli, Poornae, Parbhani, Jalna, Mukundwadi, Aurangabad, Lasur, Rotegaon, Manmad, Lasalgaon, Niphad, Nashik, Devlili, Igatpuri, Kalyan, Thane, Dadar, Mumbai, MP Hemant Patil demanded to include these prominent places in the route of this train. It is through a letter to Danve, Minister of State for Railways. While the residents of Nashik have strongly protested to take this vehicle till Hingoli.

Nashik residents do not want this car to run out of the district at all. Monthly Pass Holders and President of Pravasi Welfare Association Rajesh Fokne, Former MLA Yogesh Gholap, Kiran Borse, Sanjay Shinde, Kailas Barve, Ujjwala Kolhe, Dattaram Gosavi, Nitin Jagtap, Gurmeet Singh Rawal of Railway Council, Balasaheb Kedare of Railway Pravasi Sangathan etc. Has opposed the demand. According to Nashik residents, Godavari Express is very convenient to go to Mumbai like Panchvati, which reaches Nashik Road at 9.30 am. If it is taken to Hingoli, it will be convenient for the citizens of Marathwada, but it will be detrimental to the people of Nashik. When coming from Hingoli, it will be full of passengers. Passengers of Manmad, Niphad, Nashik Road, Devlali, Igatpuri will not get place. The Nashik-Pune Express was to Nashik, which is not getting a place for the people of Nashik till it reaches Bhusawal, the Tapovan Express was to Manmad, which was run to Nanded. Rajyarani Express also ran to Manmad-Mumbai, which was taken to Jalna.

There will be a change in the e-commerce policy, small sellers will also get equal priority, the government is preparing draft