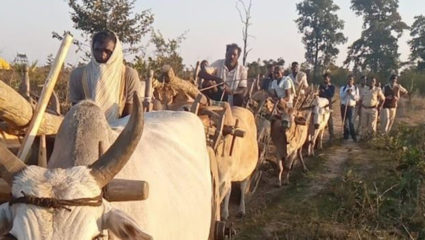 Gadchiroli, As soon as the confidential information was received about illegal harvesting of teak trees and smuggling from the forest of Jhimela village under Alapalli forest area of ​​Alapalli Forest Department, the forest department’s smugglers have exposed teak smuggling by taking guerilla action. In this action, a total of 8 lakh 50 thousand rupees, including teak, bullock cart and bullock, have been confiscated by the detachment of the forest department.

Teak was being smuggled from Jhimela forest by illegally felling teak trees with the help of 6 bullock carts and 12 bullocks. On getting information about this incident, Tim of the Forest Department surrounded the smugglers. At the same time, teak smugglers were caught red handed while smuggling. In this action, the forest department’s detachment has confiscated teak worth lakhs of rupees including 6 bullock carts and 12 bullocks.

The journey from Ghaziabad-Delhi to Lucknow will be completed in three and a half hours: Nitin Gadkari

‘Courts and Constitution to decide’: JP Nadda says no BJP decision on Kashi and Mathura

In its first official assertion on the continuing Kashi Vishwanath Temple-Gyanvapi Mosque dispute, the BJP…