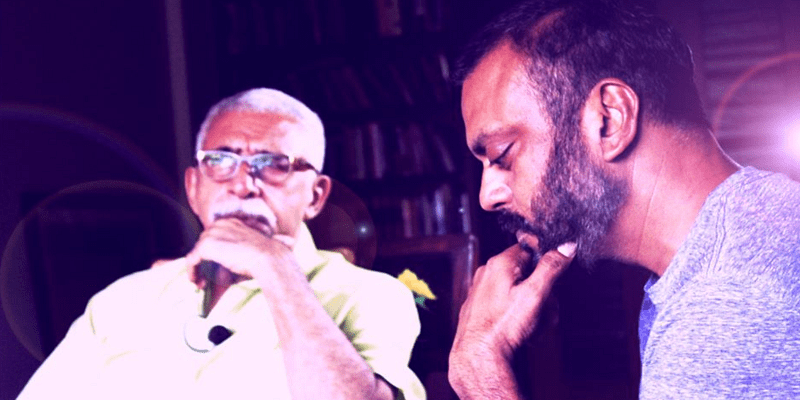 Manish believes that the scope of literature is constantly increasing and it has immense potential in the coming years. Today, a large number of books and audiobooks are being used to make literature accessible to the people, it may be changing its medium in the coming times, but the reach of literature will remain constant.

With the availability of entertainment options available to people after the digital revolution in the country, people’s interest in literature has started to decrease with that. Today, filmmaker and novelist Manish Gupta is moving forward with a commendable initiative to connect the masses with literature in the era of easily available entertainment content on the Internet.

In a conversation with Yourstory, Manish stressed that today the seriousness of language is ending among people, they are swinging somewhere between Hindi and English and that is why literature is getting out of their reach. Used to be.

After making films in New York and operating a nightclub in Miami, when Manish returned to India a few years ago, he founded the Hindi Kavita Manch with the aim of bridging this gap and taking Hindi literature to the masses.

‘Why people in our country are not able to speak Hindi, Marathi or even other languages ​​correctly! The English spoken here is also average, with only 300-400 words in total. If we do not have the knowledge of the language, then our range of thinking can also be limited.

According to Manish, ‘Our association with other languages, especially English, which dominates most of the places today, is necessary to an extent, but we need to be more connected with our own languages ​​too.’

He also remembers a time when people were more interested in novels and magazines and TV penetration was not even common. Children had comics in their hands. Manish says that ‘Then when Doordarshan came, people also used to watch programs like Krishi Darshan all day. Doordarshan also produced series etc. on the writings of many litterateurs, though his quality was not as good, but after that gradually the scope of Hindi literature gradually shrunk. ‘

Referring to current writers, especially novel writers, Manish says that even though most writers are bestsellers today, they are not as serious about literature, but they are usually involved in pulp fiction.

When Manish decided to move forward with the goal of making real Hindi literature accessible to the general public, he did not get any support from the people around him, but people also tried to make fun of it.

Manish remembers the time and said,

“People used to address me saying that I am an NRI who is moving around with idealism. In spite of these things, I did not want to sit around accepting defeat, so I decided to move forward based on my decision. ”

At that time, Manish met people who had acceptance about literature. Majority of these people were from college like NSD and were more interested in literature. In this way, many people gave their approval for the cooperation of Manish and Manish went a step further towards his goal.

When all the people agreed to support Manish, they also understood that till now they had not taken any such idea, even though they have a special place in the heart of literature and today Want to see literature moving forward in the environment of

“Initially, we personally invited people to join us, but shortly after the beginning of this journey many well-known names agreed to join us.”

A large number of poets have presented their works in ‘Hindi poetry’, along with many big artists associated with literature and cinema-like Naseeruddin Shah, Manoj Bajpayee, Imtiaz Ali, Varun Grover, Manav Kaul and Swara Bhaskar on stage. Have read the writings of poets on stage.

“People come to the stage seeing big names, but the wide range of material available on the platform keeps them with them.”

It did not take long to make Hindi Kavita Manch a place among the people. Videos of Hindi poetry were also shared on WhatsApp and other social media and the platform made a special place among the people who love literature, but according to Manish, this journey continues unabated and continues to spread literature to every corner of the country. Is moving forward with the purpose of carrying.

With the launch of the stage, a large number of people approached Manish and urged him to join the platform. Most of these people were engineers and doctors, who were interested in literature.

“We urged these people to do something about literature in their own city, so that literature can be communicated from those cities and new writers and poets get a chance.”

As this campaign progressed, a large number of people from these cities came forward and expressed their desire to perform on the ‘Hindi Kavita’ stage, which was heartily welcomed by Manish.

Talking about the project, Manish says that,

“It has never been our objective to take financial advantage from this platform, but with the passage of time, people have liked it immensely and (laughing) now people have started calling it a classic.”

“I made many films, I also ran night clubs in America, so my life has been full of colors, but the love found here cannot be described in words.”

Along with Hindi poetry, Manish also started Urdu Studio Manch, which got a lot of recognition in Pakistan including India. With this, Chhattisgarh Studio and Punjabi Studio were also started with the aim of bringing regional literature forward. During the lockdown that began due to the Corona epidemic, a large number of artists and litterateurs performed live in Punjabi studios and during this time it attracted a lot of discussion in India as well as in Pakistan.

In Hindi poetry videos, artists are seen performing and according to Manish, those artists also get benefit from this. On seeing his performance on the Hindi poetry stage, the big directors are also ready to connect those actors with them and thus the stage opens up new avenues for those actors.

Talking about the future of this platform, Manish said that now he wants to move forward in other languages ​​as well. Today a large number of people are getting attracted to this platform to connect with literature.

Manish admits that he is not in competition with any other platform, rather he says that

‘At this time literature needs a lot of support, so the more people can directly connect with this campaign, the better it will be for literature.’

Talking about the funds needed to move the platform forward, Manish says that he has put all his deposits in it, although today many big names are ready to join this platform and invest money, but Manish is just for business and profits. For the purpose of, one is not comfortable with connecting anyone as an investor platform.

Manish believes that the scope of literature is constantly increasing and it has immense potential in the coming years. Today, a large number of books and audiobooks are being used to make literature accessible to the people, it may be changing its medium in the coming times, but the reach of literature will remain constant.

Investors can get 60% returns in SBI, all-round performance will benefit in challenges