Farmers Protest: Haryana CM Manohar Lal Khattar came under attack from the opposition after his remark 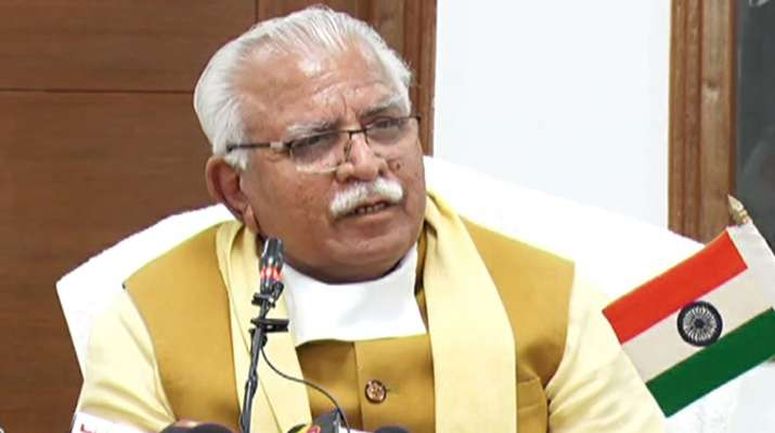 Haryana Chief Minister Manohar Lal Khattar said during a meeting of the Bharatiya Janata Party Kisan Morcha in Chandigarh on Sunday, when he asked the people present to form groups of 500 to 1000 people and go to jail. Asked to be ready to go. To this, opposition parties and farmers’ organizations alleged that he was asking BJP supporters to attack farmers opposing three agriculture laws of the Centre.

A video clip containing Khattar’s remarks has gone viral on social media with the opposition and the United Kisan Morcha alleging that he is asking alleged BJP supporters to lift sticks against the protesting farmers. Referring to the possible impact of the farmers’ movement in the program, Khattar said that there is not much problem in South Haryana and it is limited to the northern and western districts of the state.

CM said that make a group of 500, 700, 1000 people, make them volunteers. And after that everywhere Shathe Shathyam Samacharet. What does it mean like that? Khattar said don’t worry…when you stay there (in jail) for one month, three months or six months, you will become a big leader. The name will be recorded in history. The Congress has targeted the Haryana Chief Minister over this remark.

Congress leader Randeep Singh Surjewala tweeted, “Your (Khattar’s) gurumantra of BJP supporters to attack the agitating farmers with sticks, go to jail and become a leader will never succeed. He said that this call to spread anarchy in an open program by taking oath of the Constitution is treason. Modi-Nadda ji also seems to agree.

He said that if only the Chief Minister of the state talks about spreading violence, breaking the society and destroying the law and order, then the rule of law and constitution cannot run in the state. Surjewala further said that today the BJP’s anti-farmer conspiracy has been busted. The time has come for such an anarchic government to run.

Apart from this, Congress spokesperson Gaurav Vallabh told reporters that our demand is that Haryana Chief Minister Manohar Lal Khattar should be removed immediately. Such a Chief Minister who is instigating BJP workers against farmers despite holding a constitutional post, does not have the right to remain in office. On the other hand, Indian National Lok Dal leader Abhay Singh Chautala alleged that Khattar wanted to spread anarchy in the state by speaking the language of violence. He said that a case of sedition should be registered against the Chief Minister.

Khattar also said that if any protest has to be suppressed, it can be done through a government order. He said the protesters are our own people, not an enemy. Farmers agitating against the Centre’s controversial agriculture laws have intensified their protest against the leaders of the ruling BJP-JJP alliance in Haryana. They gather near places where programs of leaders of BJP or Jannayak Janata Party (JJP) are held and protest vigorously.

Women’s Care: How should women take care of their health regularly?